Lumina… the shining light of our flagship range. Can you believe it’s been one trip around the sun since a big bang of a launch? With a year of pandemic, pub closures, can and cardboard shortages behind us we wanted to look back on how Lumina has navigated its way through the last year and into your fridges, shop shelves and bars. And beyond that - we want to raise a glass of session IPA to celebrate one of our favourite beers! 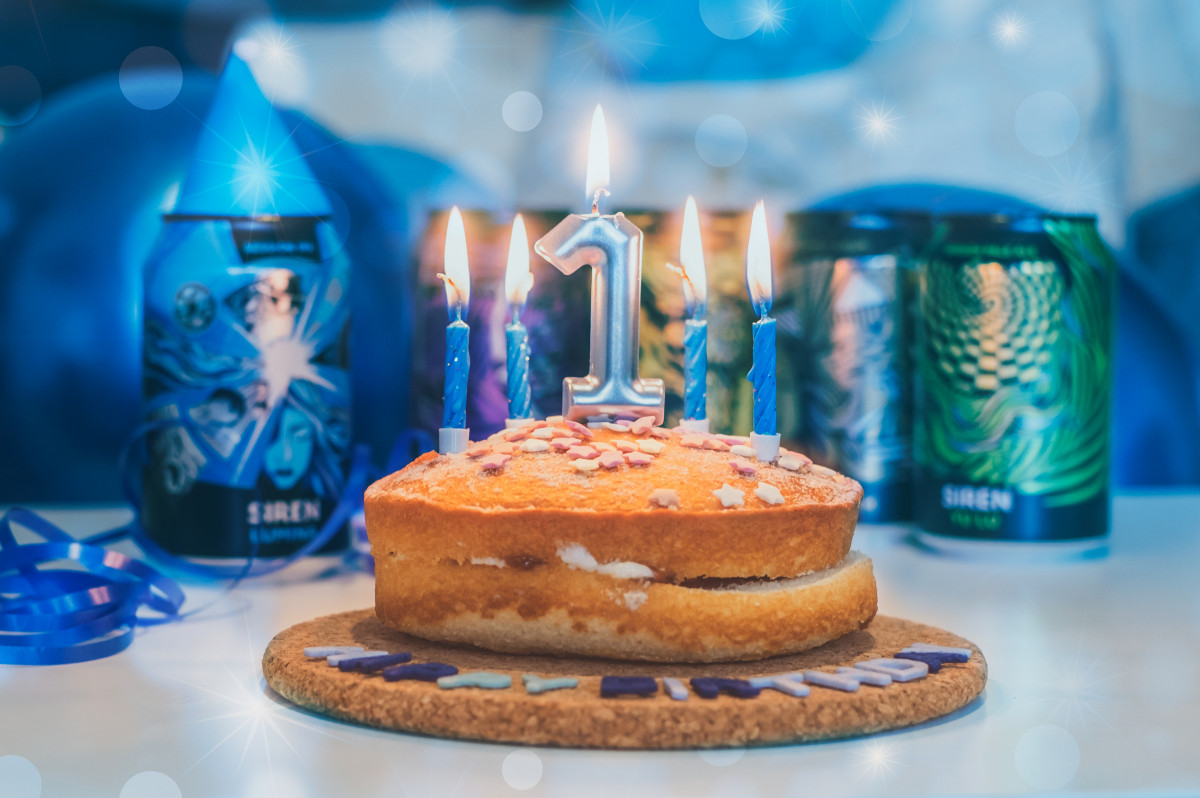 Before we get into the nitty gritty, we wanted to let you know about our competition, running all this week! Send us your favourite Lumina memories from the last year, using the hashtag #LuminaMoments. We'll choose our favourites to share, on the spot prizes and one lucky winner will grab themselves a free Lumina Lightyear box! Check out the box by clicking here, and head over to twitter, instagram and facebook to send us your photos! 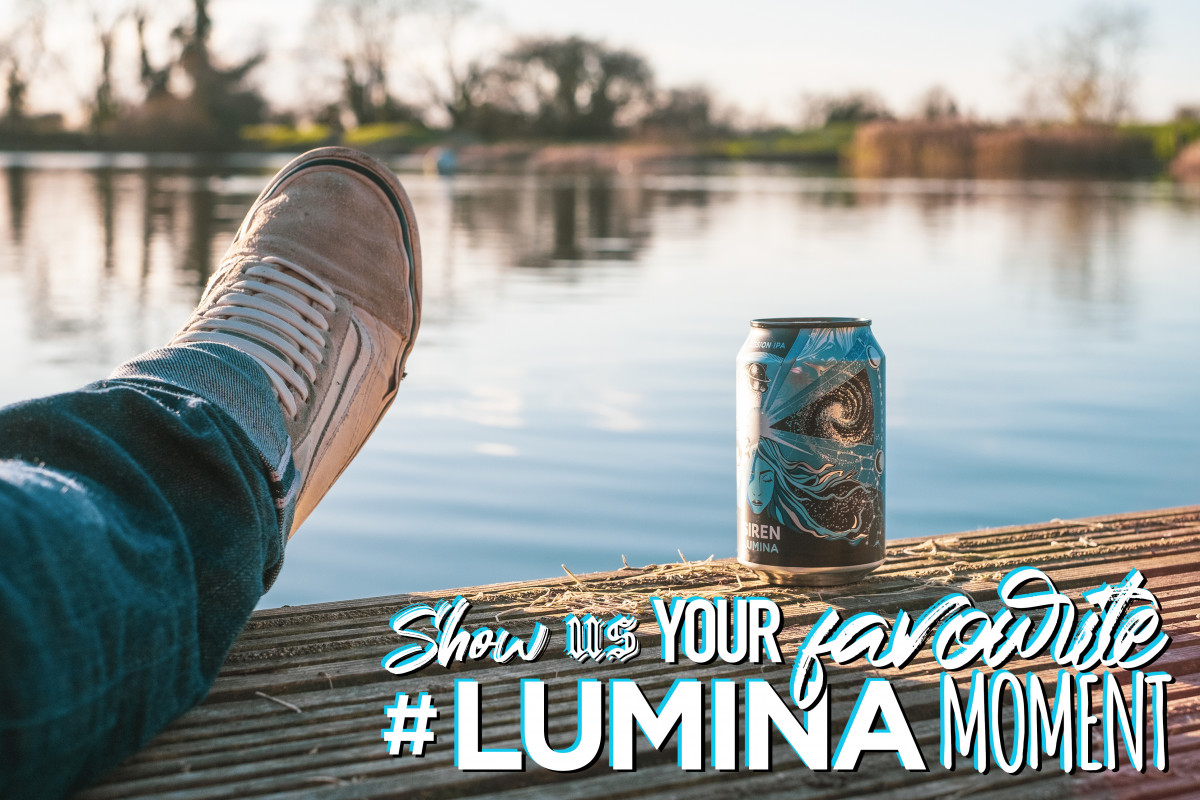 On June 12th, 2020, we wrote about The Value of Flagship Beers. It was the first public step with a nod towards a change to the flagship range. In it, we spoke of how the industry is geared towards new, exciting beers and an ever-changing lineup of possibilities. We have no issue with this. That desire for difference inspires our creativity and our drive and ultimately lead to us releasing over 88 unique beers in 2020. We think that’s probably more than anyone’s ever done, feel free to correct us on that!

“We’re perhaps best known for the more creative and boundary pushing brewing, working with producers of all shapes and sizes, experts in their fields who can bring the same passion for ingredients, whatever that may be, as we have for beer.  But experimenting aside, we’re also big proponents of the concept of core beers.”

The blog also talked about the value, in our opinion, of regular, reliable and consistent brewing.

Since our conception, having a flagship range has been at the core of our output and a hugely important part of our identity. It’s well known that ‘Maiden’ was our first ever brew, but did you know that the 2nd brew was Broken Dream, and the 3rd was Liquid Mistress. 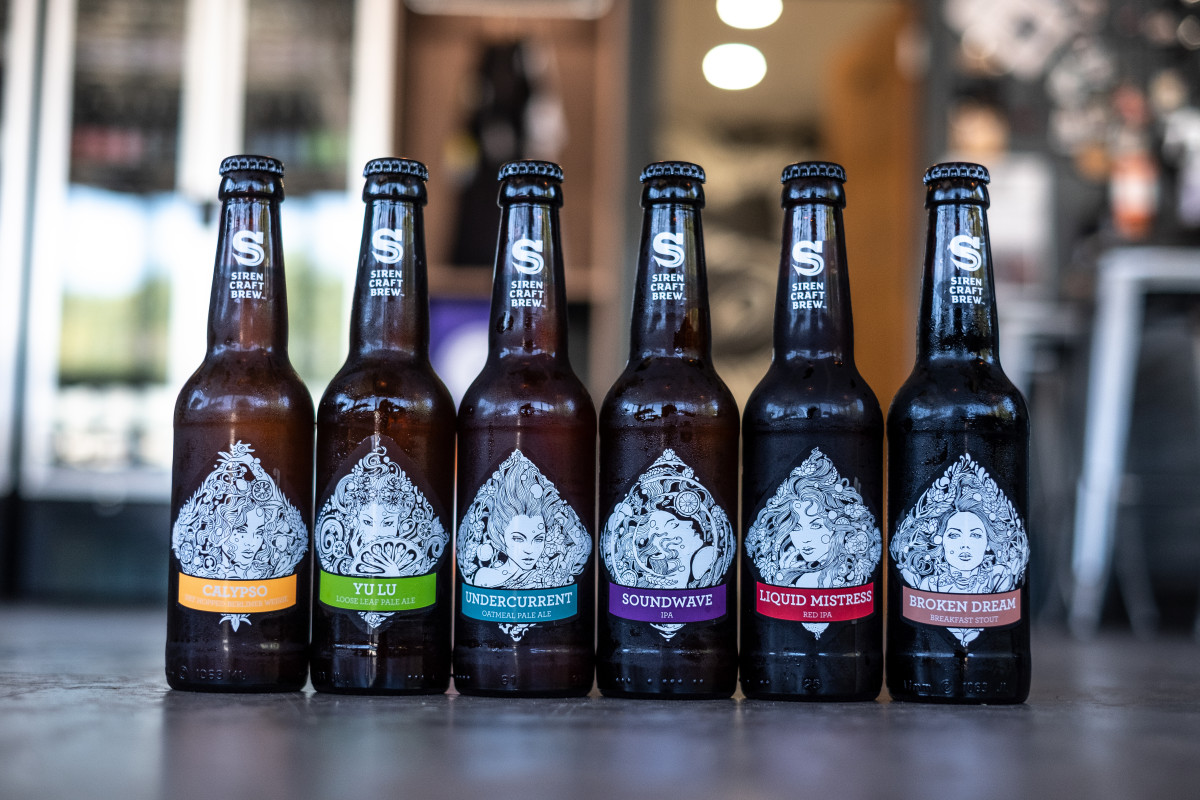 Broken Dream still takes pride of place in our Flagship range, although we made the decision to retire Liquid Mistress. Whilst Broken Dream and Soundwave have been long term mainstays, we’ve never been afraid to keep things fresh. Over time we’ve added Calypso, and Yu Lu, and who knows what the future holds?

Lumina, however, started life long before that blog. It was in 2019 that we identified a gap between 3.6% Yu Lu and 5.6% Soundwave. Our ever popular rotational hop series, “Suspended in…” had been gracing keg and cask pumps for some time and we wanted something like that in the flagship lineup.

The stars were starting to align.

Enter then, Refractions. Soft launched into keg and cask only in January 2020, this was the first step towards Lumina. A 4.2% Session IPA that still packed a punch of flavour. This first batch was a test flight to gauge reaction and give us a chance to experiment and tweak. 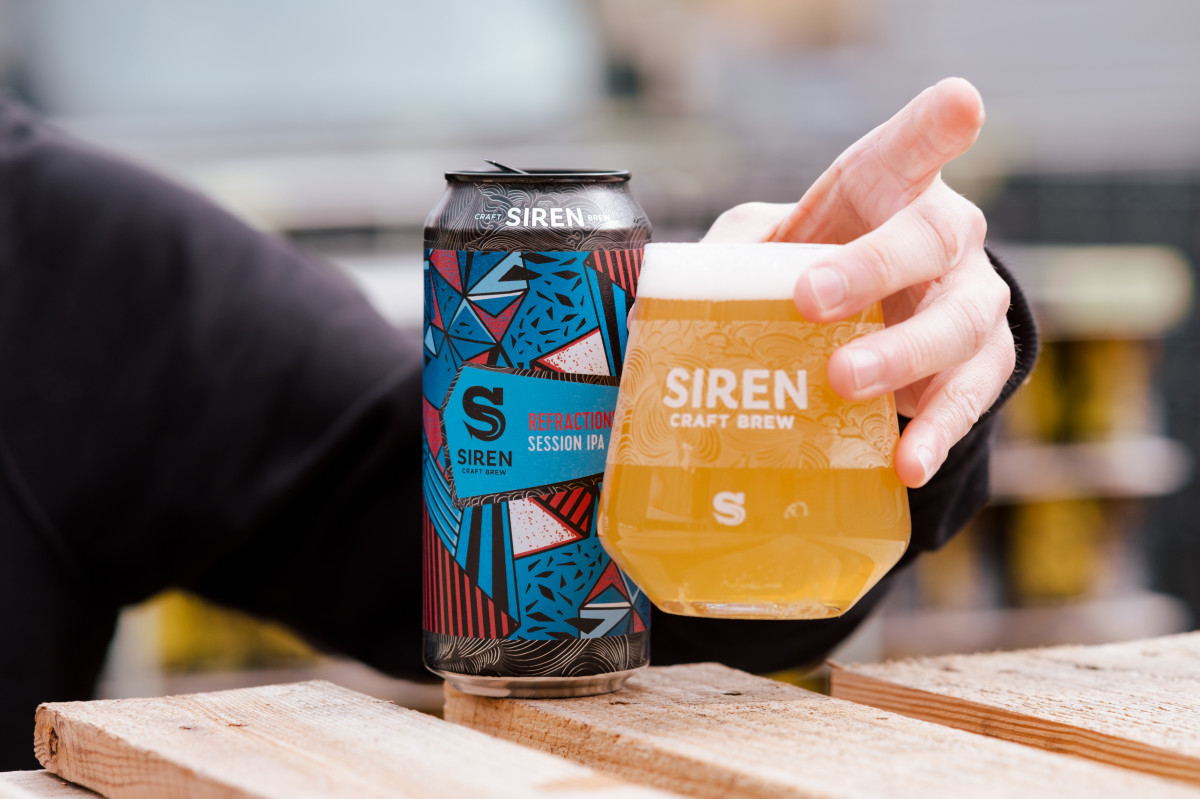 Subsequent batches of Refractions made their way into can, and it become a popular and consistent seller on the webshop, and to trade. All the while, Sean and the brew team were tweaking hop profiles to perfect what would become Lumina.

Meanwhile, in a cafe in Liverpool, shortly before lockdown one, Darron, Andy, Tim and Will from Studio Parr took a moment out of BeerX to finalise plans. The name was set, the story and personality set in stone and the vehicle was steadily rolling towards the launch pad.

Studio Parr had already given us our incredible rebranding, the previous year. Our Sirens were brought to life in vibrant, expansive and expressive canvasses that told a story to themselves. Sitting right in the middle of the flagship range in terms of ABV, Lumina was to be the shining light. We wanted it to be an explosion of energy and flavour and the design was to reflect that.

“Tying back to the ancient themes of our brand, nothing has ever quite been such a source of inspiration to humans over the ages - from the stars guiding sailors to the mythical figures behind constellations. Star lore is the building of mythical stories about the stars and constellations, and its history is epic, having been practiced by nearly every human culture in history dating back as far as 5,500 years ago.

So broadly, Lumina draws inspiration from the celestial world. As the stars have fascinated, inspired and guided us throughout the ages, we designed this beer to be the shining light of our flagship range that you can always look towards.”

Lumina is a beer influenced by modern tastes as much as it aims to inspire them. Azacca, Mosaic, Ekuanot, Hallertau Blanc and Chinook hops combine so in drinking there’s a welcome edge of pine and grapefruit flavour to the overall juicy profile. The mouthfeel is soft with layers of oats (making up around 15% of the grist) helping this, along with some nice body. There’s just enough perceived bitterness there to freshen up the palate and get you ready for the next sip. It’s out most universal beer - being super drinkable, gluten-free and vegan friendly. 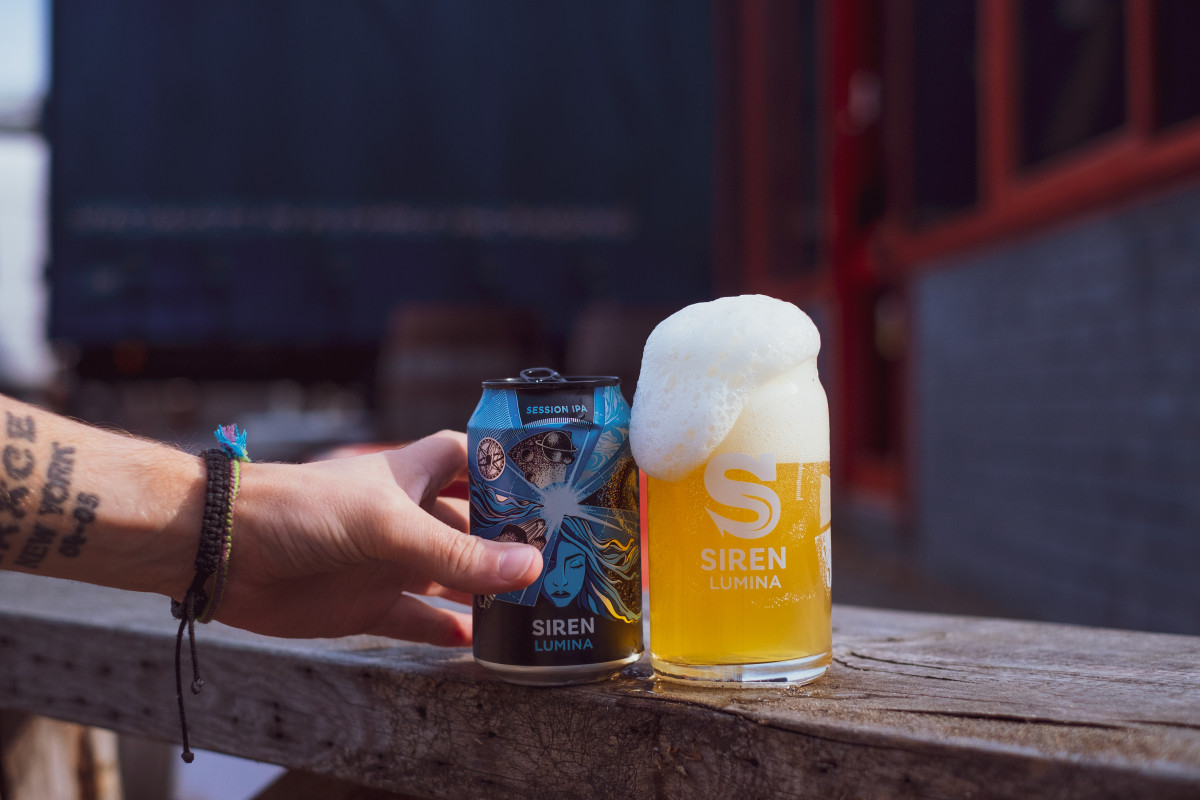 With everything in place and the beer tasting amazing, a launch date was set. And then it wasn’t. The pandemic was rearing its ugly head, lockdowns were announced and our friends in the trade closed. Where we’d hoped to  host big Lumina launch parties up and down the country, it just wasn’t to be. For the first time, this was to be a can only launch and we had to get creative.

We decided to embrace the situation, putting together a beer festival worthy lineup of beers, snacks and other goodies to support a Stargazing evening, planned for late July. The idea of people being outdoors with their loved ones enjoying a beer really resonated with us, and seemed a worthy pursuit. We may also be the only brewery in the world to have made their own Planispheres - again, feel free to correct us on that! 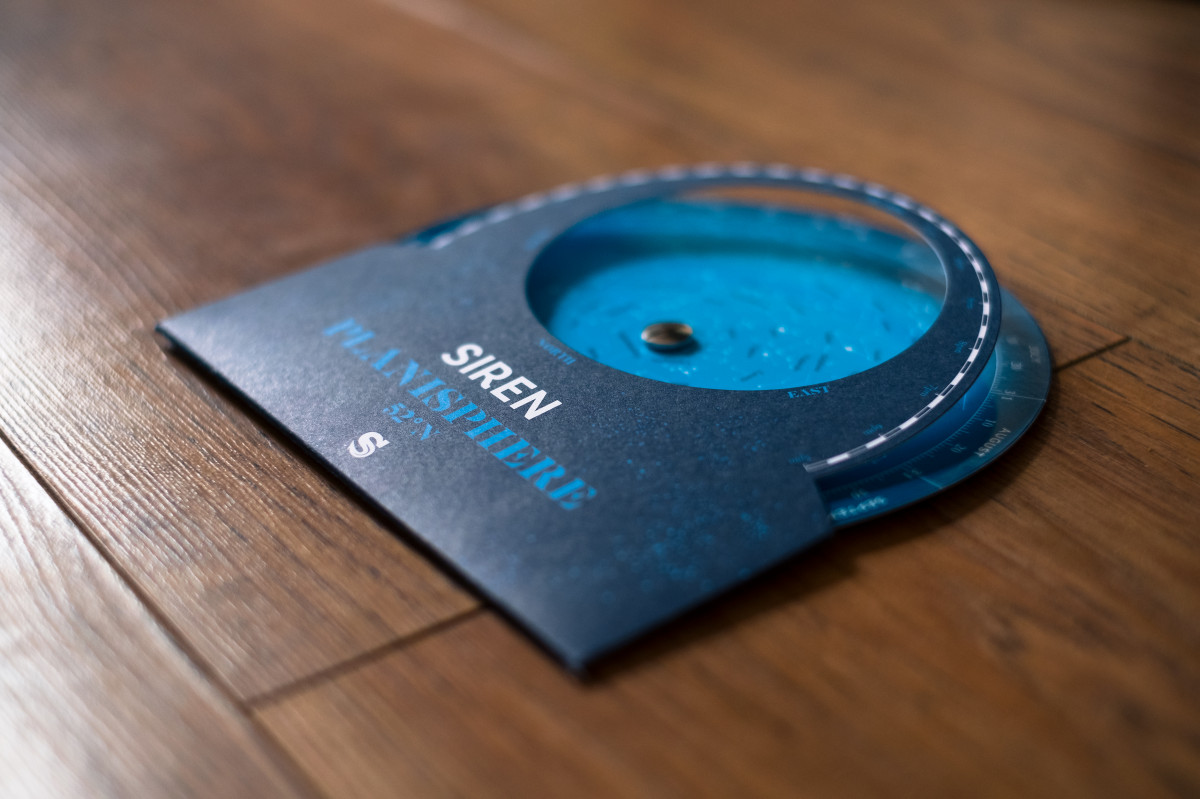 We also created the “Lumina Orbital” 330ml can shaped glass, which proved to be hugely popular. Guess what - we’ve held some back, and are available in a very special series of Lumina Lightyear packs.

Here’s some of the activity from the launch day:

We’re proud to truly explore the stars in the form of a Star Gazing night on the 31st July, and we’re delighted to be partnering with the amazing @DrBecky_ to help us host this galactic occasion. #LuminaLandingpic.twitter.com/KitMg8l3Dq

We were also supported by some amazing indie bottle shops and online stores, and Lumina is still available today in all of them. Thanks to everyone involved - we couldn’t have done it without you!

Lumina Out In The Wild

Lumina is probably best known for its 330ml can format, but it’s been amazing to roll it out  into bars on keg and in cask as well. The Lumina universe is slowly expanding, and not just to the aforementioned planispheres. Lumina now graces stickers, bar mats, t-shirts, pint glasses, banners, posters and our favourite - parasols.

With pubs only opening outdoors initially, it was largely a case of pints in the rain. Thank goodness for large Lumina parasols! Thanks to places like the Ten Tun Tap House in Alton and The Nags Head in Reading amongst many others for providing the ultimate beer gardens for Lumina pints! 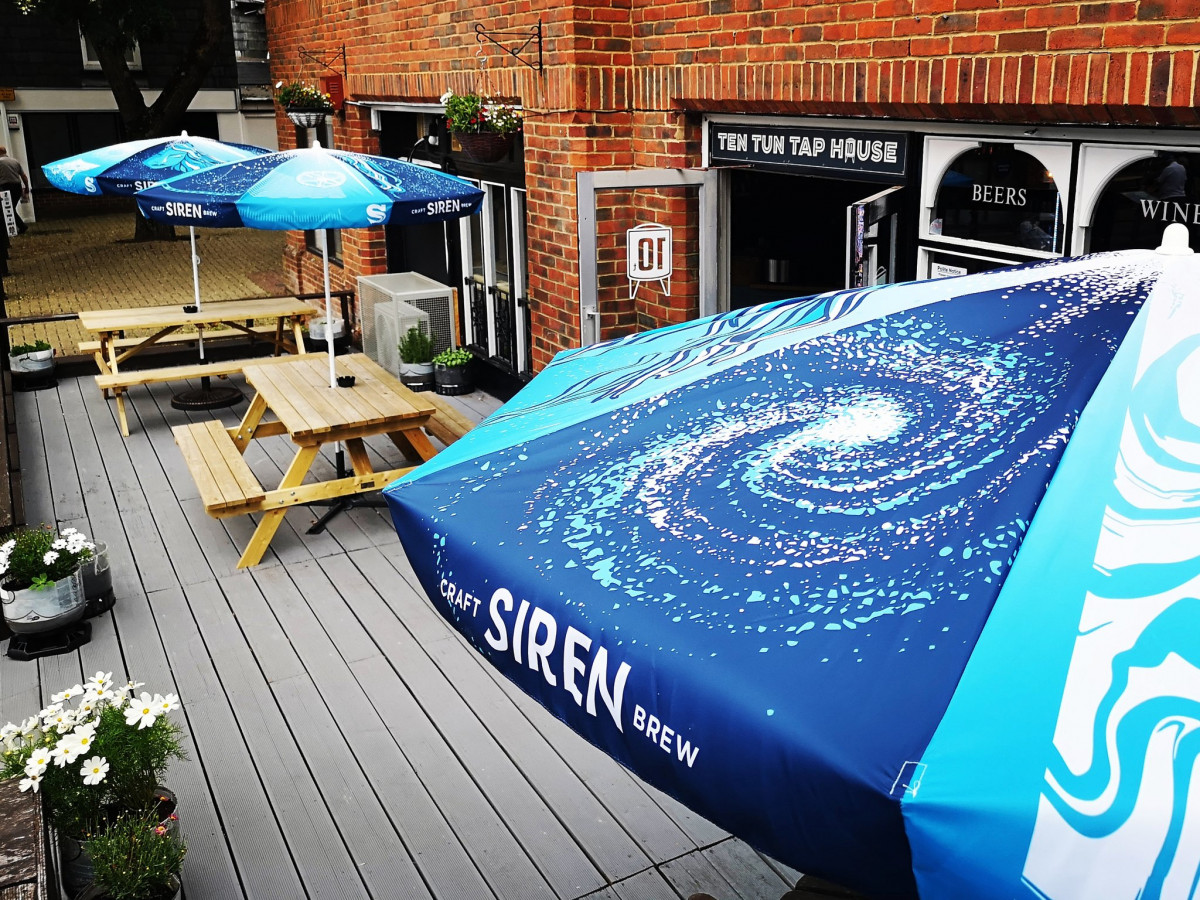 A celebration of Lumina

You’ve made it this far! Thank you for reading. Lumina has become our second most popular beer in our range behind Soundwave, so it’s available from more places around the country than ever. It’s most likely in your local indie bottle shop (if it’s not, have a word!). It’s also available in more than 200 Waitrose stores up and down the country, and we’re working on getting it on the bar of your local pub - wherever that may be!

As previously hinted, we’re celebrating Lumina with some very special bundles on the online store. In fact, one of them is so special there are only 5 available! 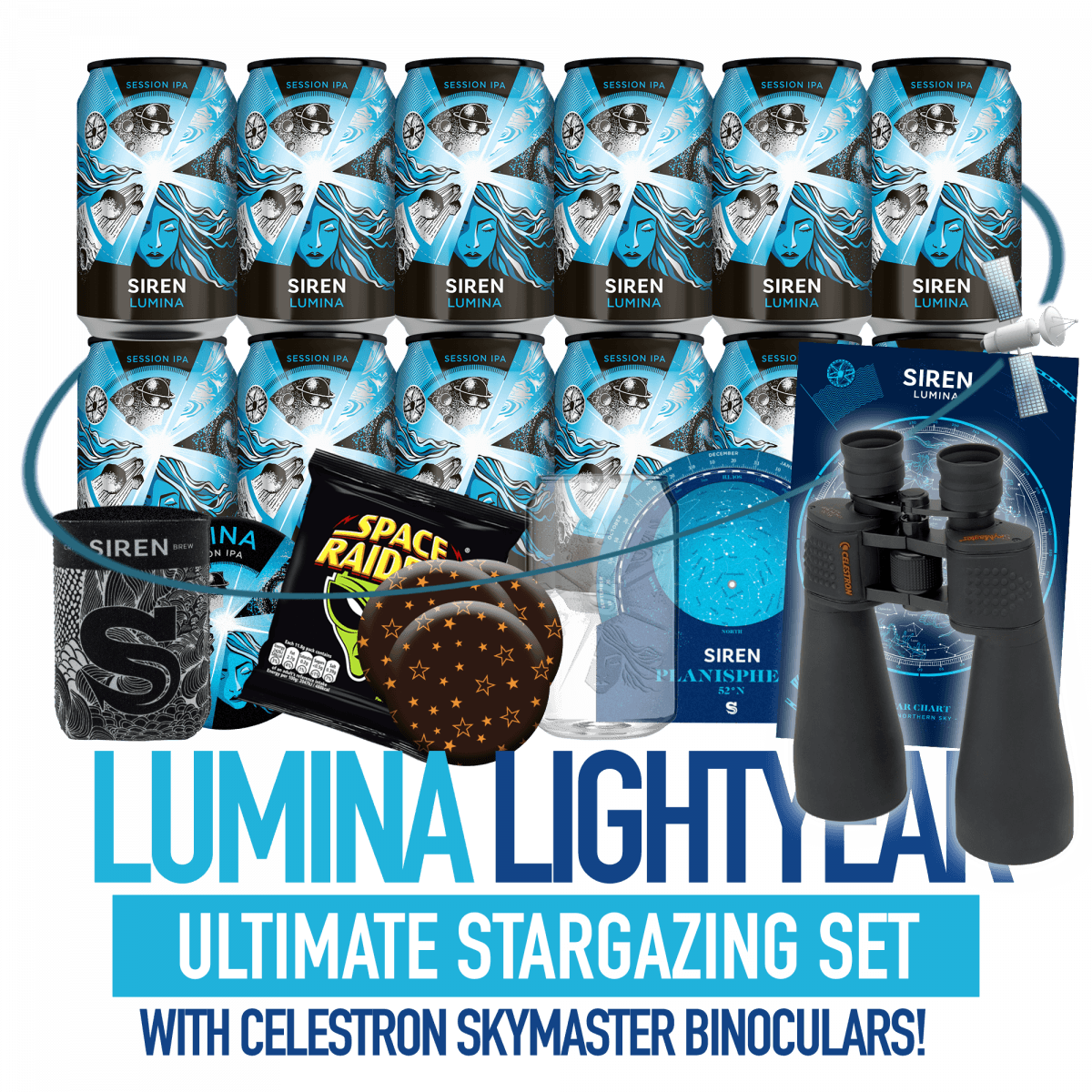 What’s next for Lumina? You can expect to see beautiful 4 packs coming this year. We’re also looking to reinstate an old Siren tradition of celebrating a brewing milestone with a special version of a flagship beer! How might this transform our favourite session IPA? Let us know what you’d like to see!

To celebrate the birthday of our first brew of Lumina we have put together a very special limited edition mixed case. Whilst stocks last - when they're gone, they're gone!