A journey that started in February 2013 is coming to its first rest stop.  In truth, the genesis of this project was a good 7 months before that, but it was the first weekend of a cold February that this beer was brewed. In case you haven't come across any of our past blogs on Maiden, here is a recap.  We wanted the first beer we brewed to be something special and to be released on our anniversary. Our concept was to split the beer into various types of barrels to be aged over the year and then brought back together in a blend.  The  hope being that the different spirits & wines that had lived in the barrels previously along with the different types of oak could come together to create something unique but also harmonious. To be fair, it was quite a risk.  The trouble with barrel aging is you can never be 100% sure which way each one will go and we didn't want to limit the project at an early stage by trying to cap what we used according to a predefined end idea.  We chose a wide array of barrels and took the view that some of them may not make the final cut, expensive, yes, but hopefully worth it. So on that cold day in February we brewed a solid Hoppy American style barley wine which fermented in the tanks before being transferred to Bourbon, Tequila, Armagnac, Madeira and Rum barrels.  A little too much active yeast finished the beer a bit lower and with a little less sweetness than was intended, but that was it for the next 10 months or so. 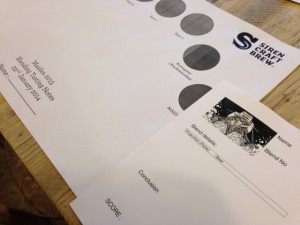 Our hope was that we could get some expertise from the whisky and wine world when it came to creating the final blend for Maiden, and with some help from Chris at The Hanging Bat, we talked to the very skilled and friendly bunch at Compass Box Whisky.  Talk about striking gold, already a big fan of their Peat Monster and Asyla, what they do really married up with what we wanted to achieve.  They take a range of distillates from the best distilleries, age them in various different casks and then use these as building blocks to create the end product.  Perfect, exactly what we wanted to do. So fast forward to the 22nd January 2014, Celine and Gregg from Compass Box head down to our tasting room in Finchampstead to help us put together Maiden 2013.  To represent the wine world Olly Ford-Lane, our newest team member, stood in.  Ollys background as a wine and beer buyer for Direct Wines has involved blending a range of wines direct from the vineyards tanks and gave him an excellent base of skills to work on this project. We started the day by talking a little about the project, our hopes and vision and also setting out the ground rules; if you don't like it, don't use it.  The end product is far more important than using up all the barrels. 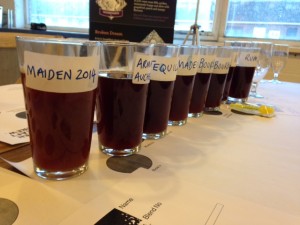 Gregg, Celine and Olly then gave us some insight into how they approach blending and what they look for in their world.  This was fascinating and gave us all something to think about as we got started. Large glasses of each barrel were laid out in front of us and the first order of the day was to taste and make notes on each individual barrel as our starting references.  Some of the barrels had imparted exactly the flavours you would imagine, Bourbon giving vanilla & coconut, Madiera giving acidity & red fruit.  Others gave wild and crazy high notes with the Tequila as the stand out funky (not in a yeast way) one, giving a fruity, cucumber and herbaceous  hit.  We also had on hand a fresh batch of what will become Maiden 2014 to use if it was needed. 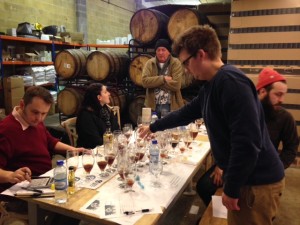 On to the blending.  Some tried various starting points by building a base using 35-45% of one or two similar profiles, and then experimented by adding high notes, others tried a much more evenly split approach.  The results were interesting, with everyone sharing some of their creations, taking feedback, and giving opinions.  The range of directions to go and the change of one small component we very quickly noticed could change the whole balance. 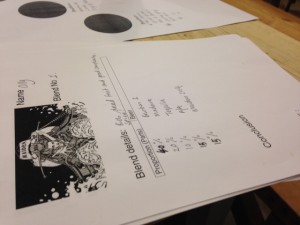 After much discussion, sipping, eating crackers, talking whisky and beer, we each put together our favourite blend and then one by one passed them round for discussion and voting.  I am pretty sure I speak for us all when I say that the two best blends came from Celine and Gregg from Compass Box.  They were both very different; one being fresh, fruity and bright with the Madeira barrel cutting a mark adding red fruits and a nice acidity in the beer.  The other  blend and the last one we all tried was completely different.  Toasty, spicy, rich dried fruits with great layering that seemed to allow all the barrels to add their note, and a nice long finish that made you want to come back for more. The final blend has now been decided.  Now the hard work of blending, bottling and packaging the beer to get to you starts.  But one last stage remains for the Maiden of 2013, each barrel will be left with 10-15% to start our Beer Solera System.  Added to the 2014 line up we have Banyuls and Sauternes to add to the mix for next years blend. 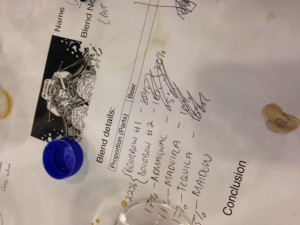 This has been a fun and exciting project and really caps off a great first year.  We are looking forward to launching the beer in early march and we are hope you love it as much as we do.  Keep your eyes on the usual channels to find out how you can get hold of some. 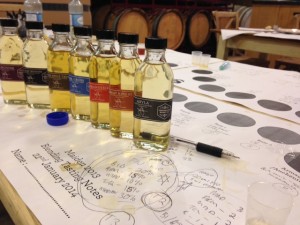