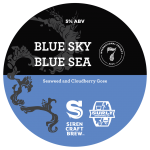 We're delighted to announce that our Rainbow Project 2015 collaboration with Surly Brewing Company is called 'Blue Sky Blue Sea'- a Seaweed and Cloudberry Gose. One of the best things about The Rainbow Project is how it brings together different breweries with different ideas, which makes for some brilliant collaborations. This year in particular it has also brought some amazing US breweries to our shores, and in turn some superb beers for the launch events, which it would usually be very difficult to get hold of. Surly have grown into one of the most well-respected breweries in the US since their formation in 2004, with a simple philosophy of the beer mattering above all else. Their outlook is: "Make great beer. Have fun. Give a Damn about your community. Be independent. Don’t be a dick." We'll drink to that! With the colour blue in the draw and in the spirit of the transatlantic collaboration, we’ve linked the two breweries by sea and sky; our British Isles surrounded by water and Minnesota admired for its skyscapes. Seaweed provides the ocean air and salty Gose depth while Cloudberries represent the skies above. We've used two variants of Seaweed, Sea Spaghetti and Kombo Seaweed, which were both added in the boil and on the cold side post-fermentation. The first opportunity to taste Blue Sky Blue Sea will be Saturday 19th September, where the beer will be in keg and bottle at the three official launch parties. More details are available here.
Share