Bottling Beast from the East

Firstly, an introduction. I’m Tim and I just started working for Siren as Content Executive. Basically, I’ll be the guy writing blogs, taking photos, making videos and chatting to you on social media. I’m super excited to be in this job because I’m finally one of those annoying people whose job is their passion. 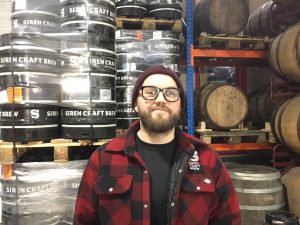 Today, I got to help out in the brewery and I was like a kid in a candy store. A big candy store filled with massive silver tanks, loud noises, malty smells and beer geeks. Awesome. 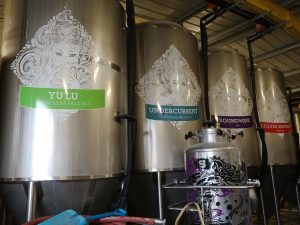 My first job was to help on the bottling line for “Beast from the East”. The first thing that struck me was how nice, helpful and dedicated my new colleagues are. Everyone took time out to introduce themselves to me and tell me about what they do and to detail exactly how it’s done. The second thing that struck me was the level of attention to detail, accuracy and quality control. Nothing happens without someone noting it down, creating a perfect timeline of events to check back on and to make sure the final product is more than perfect.

After a small initial run, the bottling process is halted. This is so that several random samples can go off into the lab to be rigorously tested. Another batch of freshly bottled beers are shaken up for 5 minutes to make sure they don’t explode. There’s probably a more scientific reason for that shake-up that I didn’t learn, but they didn’t explode so that’s good. Only when we got the all clear - the beer was perfect, the oxygen was right etc - could we proceed.

I watched in awe as every step of the process was carefully monitored. Before I worked here, I knew Siren made quality beers (Yu Lu, Sound Wave & Suspended in Space being particular personal favourites) but now I can truly tell you now that they’re quality beers. 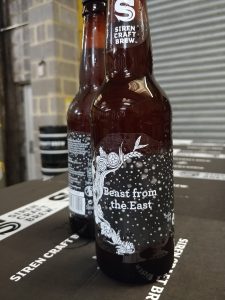 I wish I could tell you the exact processes and checkpoints that those bottles went through but it was too noisy to record sound, I was wearing surgical gloves and I didn’t want to intrude too much on an important job. However, as a beer fan, I want to know more and I’m sure you do to. I’ll be heading back to speak with everyone, doing some video interviews and walkthroughs, and giving you some more stories from the brewery. Watch this space!
Share
RELATED TAGSbeast-from-the-eastbrewerycraft-beer