Bring on the botanicals!

Gin & Tonic. It’s summer, it’s garden parties, it’s a staple of the British way of life and it’s something that’s been in Siren founder Darron’s head for a while to do something with. What that thing was, he wasn’t sure of. That was until we started stocking East London Liquor Co. in the Tap Yard. After a visit to their place, the idea of collaborating to make a Gin & Tonic inspired beer developed further.

We wanted to make something that was reminiscent of a classic G&T. Something refreshing, tasty, sessionable and with all of those wonderful G&T flavours we know and love. East London Liquor Co’s role was to supply the botanicals to help re-produce those big gin flavours.

A Gose, which is a German style of slightly sour, slightly salty beer with minimal bitterness, was chosen for the brew. Traditionally, Gose Beers are flavoured with coriander, and soured by the addition of lactobacillus after the boil. We also decided to make this beer a “Gruit”. No, we haven’t spelled fruit wrong, it’s a beer that contains no hops. We really wanted the botanicals to do the talking here.

To produce a milder sourness than what we get in Calypso and Pompelmocello, we made the beer using a blend of two batches of wort; one made using our normal kettle-souring method and then boiled to stabalise it, the other made with a standard mash.

To provide our botanic baseline, we added toasted coriander, bitter orange peel, sea salt, cubeb berries, lime and grapefruit zest, lime juice and juniper berries to both the sour wort and the regular wort when we boiled them. We then fermented with yeast to get a crisp, light finish that would allow the souring and botanics to shine through.

When brewing beers, and in particular experimental beers, it’s super important to focus on flavour - and what tastes good to our customers. With that in mind at the end of fermentation we set up some initial sensory tasting trials. Initially, the brewers decided that the recipe needed to be developed; no more coriander, more citrus flavours, pink pepper and much more juniper.

Sam from The East London Liquor Co. came to visit and took part in the second stage of trials, along with a Siren team from all across the company.

The results from the tasting panel really helped to shape how we progressed the beer. Yuzu fruit juice and 8kg more Juniper was added to help enhance the tonic flavour.

With our final recipe decided, we proceeded to add the botanicals to the first tank of Spin Botany...

...and found that there still wasn't enough enough juniper flavour! We added another 8 kilos. And another. And then the last 4kg of Juniper we had.

Finally after a total of 28 kilos of juniper, it tasted as we had hoped. Part of the reason for needing so much Juniper than expected was the difference between trials and tanks. In trials, the equivalent amount of juniper might just be a small sprinkle into a 1 litre jug. In the tank, the juniper is packed into big bags - so less opportunity for the brew to interact with the berries. 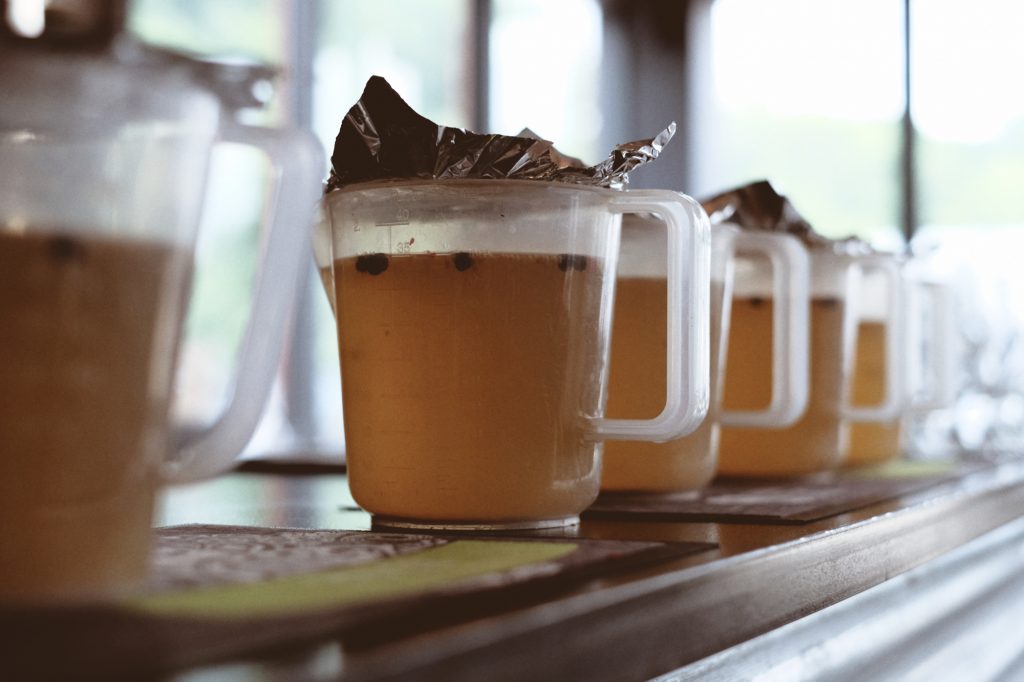 Having learned our lesson from the first tank, the second tank was infused with 34 kilos of juniper (along with peppercorns, zest and yuzu) using the ‘spinbot’, a centrifuge that helps adjuncts to interact with more of the beer. Oh hey… has anyone just realised what the name means?

All in all, Spin Botany has been quite a labour intensive, but all the while interesting project. It’s involved absolutely every one within Siren to help mould its trajectory and create a final product we can all enjoy. And enjoy we will. For us, Spin Botany is doing everything we set out for it to do and we can’t wait for you all to try it.

So get the garden furniture out and invite round the neighbours because Spin Botany is the Gin & Tonic beer this summer’s been crying out for.

If you want to try out our summer Gose creation then head over to East London Liquor Co. this evening for the launch of Spin Botany! We'll be bottling soon, so watch this space!