Calypso; a Greek goddess sought to detain Odysseus on his return home to keep as her lover.  Odysseus, being a mere mortal could not argue or resist the desires of such a beautiful goddess.  However, her temper with the gods at their request to free Odysseus and set him on his way, makes her infamous as the goddess with a sharp tongue. From this ancient story the name Calypso is given to our range of dry hopped Berliner Weisse.  Each batch will be created with a different single hop variety - 7 different hops telling 7 different stories for each year that Calypso kept Odysseus captive. First up was Citra, a citrus heavy hop which added huge juicy pineapple notes to the tart spritzy base. Next up was Amarillo with its lip-smackingly delicious freshly squeezed orange juice characteristics. This batch will also be packaged in our new 500ml bottles, specifically used only for those beers that you won’t be able to get enough of! (Ahem… always drink responsibly) Calypso’s story has only just begun and over the next 5 batches we want to show how much difference a single hop can make to the whole complexity of a beer. The real question in all this is…. Which one do you want to see next? 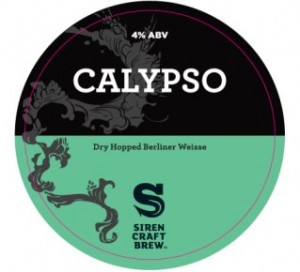