Copenhagen Beer Festival We were very privileged to have been invited to the Copenhagen Beer Festival, which just into its second year is already famous for its amazing array of breweries, bringing together the best from around the world including Brasil & China.  The challenge for us – we were two months old – how to bring 9 different amazing beers.  Our solution was to bring cask which gave us the opportunity to try some experiments in a one off way.Some of which worked extremely well, our gin spiced IPA was already working its way into a development stage, but now is firmly planted as something to do.  The Red Rind IPA was also excellent, and the Limoncello was superb, although it definitely needed to be cooler and have carbonation, a proper keg beer. In fact there were a few people who didn’t get the british cask thing and asked us why we were serving warm flat beer, and to be fair once you have had your palette hammered by hoppy zingy cold beers with bubbles, you are going to struggle to appreciate a cask beer.  But all said and done the majority loved the beers as they were and could appreciate the experimentation that Cask could offer. 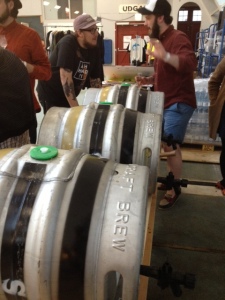 There were so many highlights to mention including the foodincluding Johns Hot Dogs, Uneka Cheese and the Chili guys were amazing.  The after party was superb and Copenhagen is such a great city.  If its not on your list of festivals to do – put it on now, you won’t be disappointed.  Some of the beers to be had were unbelievable including Firestone Walkers Parabola and Anniversary Ale and a great selection of Sours, Barley Wines  Take a look at this video to from Evening Brews http://vimeo.com/65676789
Share
RELATED TAGScbc13copenhagen-beer-festival