Dippy is leaving the building!

On Friday 20th March we hosted Tony from Boneyard Beer in Oregon at Siren.  As he was travelling on his way to Estonia to do some surfing, we all thought what a great opportunity to do a beer together. Boneyard are well known for many styles of beer, but they are probably most loved for their IPA's, so what better way to come together than to brew a proper Old School IIPA.  A good solid malt recipe was agreed in advance, the aim being to be dry and crisp - don't get in the way of the hops and at 8.5% Abv.  Then whilst mashing in we went through the hop store to see what was looking and smelling good.

Well it's fair to say Tony knows how to build a hop profile, and this giant has a hop bill that would make an accountants eyes water - hops are definitely much cheaper in the US.  Who cares, this is going to be a barnstormer.  Nothing subtle in this one, good old fashioned piney, resinous with a good bittering attack. Boneyard is so named as the brewery was put together from a "Boneyard" collection of old equipment from 13 different breweries.  In naming this beast of a collaboration we decided to honour the timely exit of Dippy the Diplodocus from the Natural History Museum in London, so 'Dippy and the Equinox' is born. 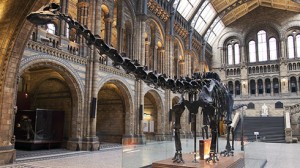