BBQ and Beer - The Perfect Pair

Here at Siren we love BBQs. You can’t beat the feel-good vibes, the social gathering of friends, family or colleagues and the appetising smoke in the air. Ideally this scene includes some sunshine of course, British weather depending.

This timeless way of cooking is incredibly versatile, cooking with direct heat, slow smokes, marinades, sauces, rubs, dressings, not to mention complementary sides - there are options for all kinds of textures, aromas and flavour combinations to suit all taste buds. The good news for us is that this also opens up limitless possibilities for pairing with our diverse range of beers. 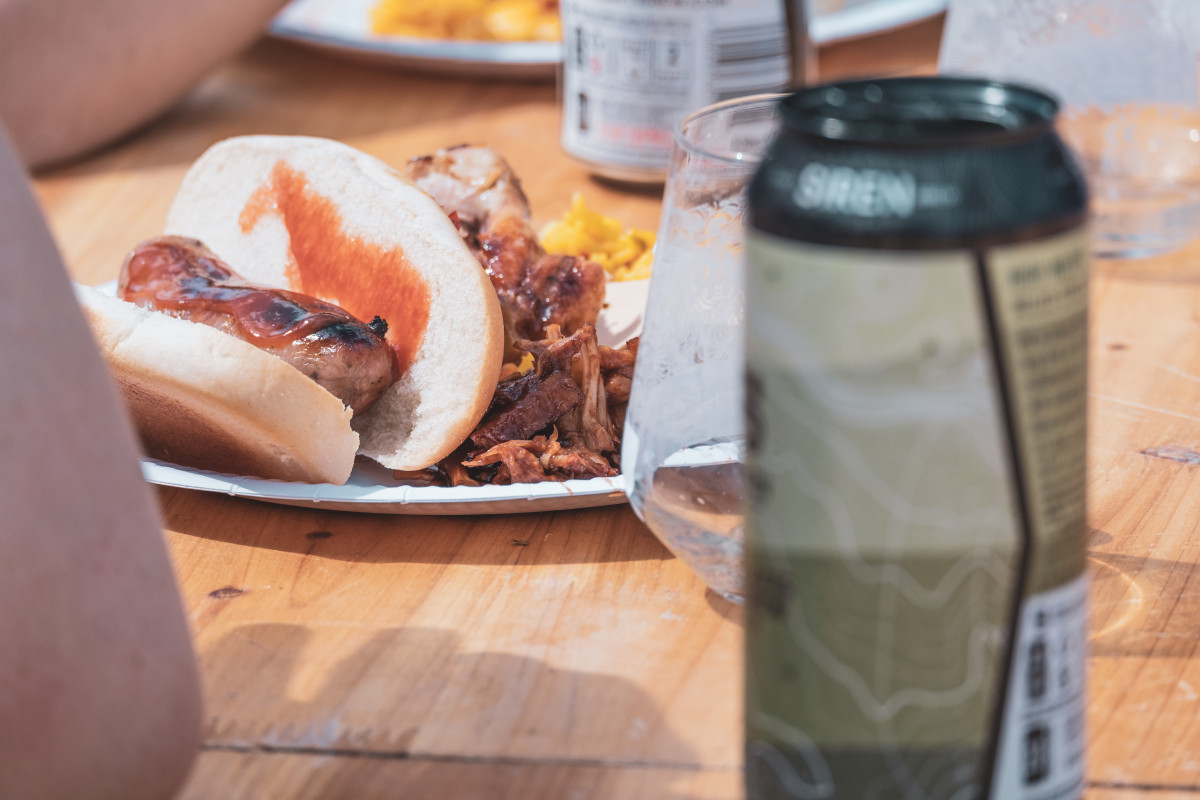 Team BBQs are something of a Siren tradition. What started out as 2 or 3 people enjoying some fresh bottles off the line and some lunch has become much more of an event lately, with our team now 50 strong! At a recent gathering we began to think about how we could bring some of our enjoyment of barbecue food and beers to you - our followers.

We reached out to Donald Russell, a premium butchers who supplies some of the world’s finest Michelin-starred restaurants and luxury hotels, along with an avid audience of home cooks. They challenged us to come up with a beer bundle to match their luxury barbecue selection, packed full of tasty goodies. Between us we came up with a bundle including a soft session IPA, through to a zingy grapefruit sour and a light pilsner, perfect to enjoy on a sunny afternoon. A word of warning though - make sure your designated griller doesn’t steal them all on duty!

Ideally you’ll pick up both the meat and the beer selections to create some magic. If you do, here are a couple of ideas to get you started on beer and food pairing. Let us know how you get on!

For our steaks, our preferred method is to “reverse sear” - if this isn’t a term you’ve heard of before then get ready to have your steak game changed! Essentially you gently slow-heat your steak in an oven first before searing it on a very high heat before serving.

Ideally, you’ll need a meat thermometer for this, otherwise you’ll be guessing and most likely to over cook.

The first step is always to season your steaks well with plenty of both salt and pepper. A well marbled steak works well for this, so go for a ​ribeye, top sirloin, new york strip, porterhouse, or filet mignon. 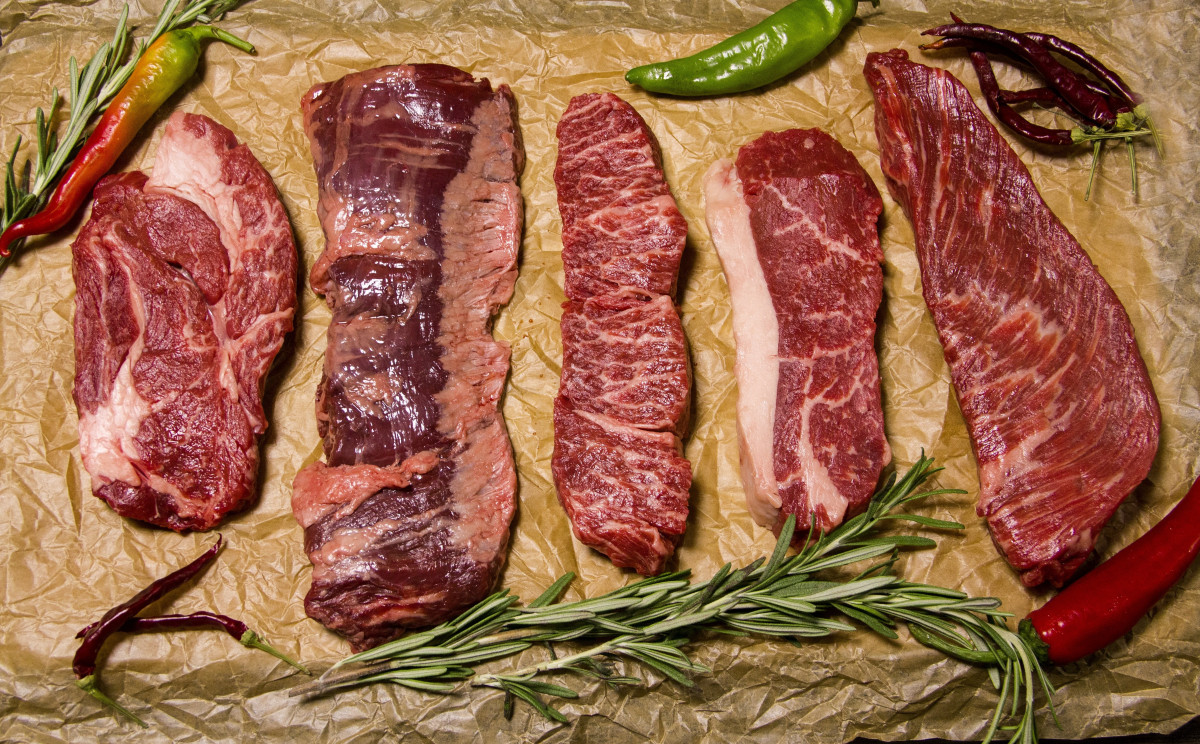 If using an oven, preheat to around 93 - 135°C. Some ovens may allow you to go lower than this, and that’s preferable. The lower the temperature the more evenly you’ll cook your meat. If using a charcoal bbq, you can pile up your coals on one side, and put the steaks on the opposite side, to allow them to cook slowly.

Once the steak hits 35°C, take it off the heat and allow it to rest. Whilst it’s resting, we want to get your BBQ up hot. Ideally, you can actually finish your steak directly on the charcoal.

It won’t take long (a minute or so!), so keep an eye on them, searing them until you have a nice char all over. If you’ve done it right, your steak is cooked, beautifully seared on the outside and still pink in the middle.

Serve with chimichurri sauce and your favourite sides. We recommend a nice barbecued corn on the cob with plenty of butter, or some charred asparagus. Our perfect beer with this is One In, All In. The meaty flavour and texture, along with the kick from the chimichurri, will pair perfectly with the sweet, roasty malt base and fruity notes of the beer!

The burger has to be the most popular and highly featured item of the Great British BBQ, but we’re sick of the overcooked and underwhelming normal.

For this one, you’ll want a mince made up of ‘chuck’, a cut of beef from the shoulder that’s typically between 15 - 20% fat. 20% fat is what we’re aiming at for flavour. You can ask your butcher and they’ll sort you out! If buying from a supermarket, try to find a good quality mince with the right amounts of fat, or try combining a small amount of sausage meat.

You’ll also want a bun of your choice. A brioche bun is the classic, but we also love a nice sesame seed bun or potato roll for a true American style.

Don’t forget cheese. If you’re going to use cheddar, choose a strong/sharp option, but we recommend simple burger cheese slices - basic, but they work.

Season your mince with a generous amount of salt and pepper and use your (clean!) hands to squish it all together. Doing this for a minute or so helps your patties to retain their shape and not fall apart. Squash your mince into equal sized balls.

Add a grill plate or skillet to your BBQ allowing it to heat to a very high temperature. Once hot, drop your patty balls on and then squash them down with a grill iron. If you don’t have one of these, a smaller skillet or even a sturdy spatula/potato masher would work. Cook until charred on one side and then flip.

Whilst the burger is cooking, lightly toast a sliced open bun. Add a slice of cheese to each patty for a minute or so and serve once it’s cooked to your choosing.

If you’re feeling adventurous, add the cheese to the patty and the top half of your bun on top of that. Cover the whole thing with an upside down metal bowl. Lift it slightly and add a dash of water, which will create steam inside the bowl. This method is known as a ‘cloche’ and works incredibly well with a brioche bun.

We don’t add much to our burgers, but some thinly sliced pickles and/or rings of thinly sliced white onion work a dream. Sauce wise, ketchup works great, but a burger sauce of ketchup, mayo and a dash of yellow mustard is also great.

With all this hot barbecuing going on, you’ll need a cold beer in hand and we suggest you make that a Lumina. Not only is it a crushable classic that’ll keep you refreshed, the fruity notes from the hops combine with the juicy meat for an absolute taste sensation.

Of course, don’t forget to make us, and the world, jealous by sharing your photos on social media!

We've teamed up with our friends at Donald Russell to give Siren Craft Brew customers an exclusive 50% saving on their Luxury Barbecue Selection, packed with tasty goodies including 2 Sirloin Steaks, 2 Extra Trimmed Rump Steaks, 10 burgers and 6 sausages, all for £29.99. Enjoy 17 servings of deliciousness with family and friends this summer.