Well 2013 was a blast.  Firstly "THANK YOU".  Really, thank you, for all your support this year.  Starting a new business at any time is never easy, the current excitement around new breweries makes it easier, but also adds another level of expectation and we all have to be at our best at all times, which is great for the customer. So it is with that in mind that we have to thank you all, for being supportive, for buying our beers and hopefully getting into what we are trying to do. Its hard to believe considering how this year has flown by that we only started brewing in February 2013, and judging from a few reviewers end of year round ups they thought we started in 2012 also. 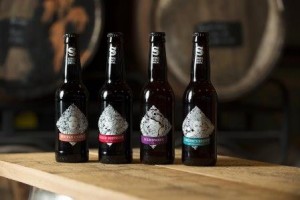 Our first year included an amazing launch courtesy of the team at The Craft Beer Co, where all of our beers featured at all of their bars on cask and keg, a trip to Copenhagen Beer Celebration where we were the only brewery with casks, a collab with Pizza Port ending with a 10.5% triple IPA, winning the locale beer of the festival at the Oxford Camra event and also winning 3 listings with the Swedish government shop Systembolaget.  We have brewed about 250,000 litres of beer this year with about 18,000 litres still resting in barrels. We will do a full post in the new year to give you a flavour of some of the up and coming things for early 2014, but to give you a sneak taster of something we are very excited about; The first beer brewed on our new kit was a big barley wine, this beer has been aged in various barrels including Tequila, Madeira, Armagnac & bourbon to name a few with the aim of blending them together into a cohesive blend while leaving a proportion of the original beer to add to the complexity for the second years aging. We have a date booked in January where we have blenders from wineries and the whisky world coming together with a few other experts to help put together the best blend possible to create a beer with layers, complexity and something that can age and develop over time.  We are considering auctioning a place at this event with the funds to go to charity so keep your eyes peeled on the usual social media spots for any further developments. You may remember us talking about the first of our blends Odyssey which we were hoping to release, but due to a number of reasons we wont now be able to get this out until March/April, but it will be all the better for it .

We are aiming to push on in 2014 with more interesting ideas, looking at new ways to improve consistency and quality, and many more events.  Once again, as the year draws to a close, thanks for supporting us, have a great New Year.
Share
RELATED TAGScopenhagen-beer-festivalmaiden-2014the-craft-beer-co