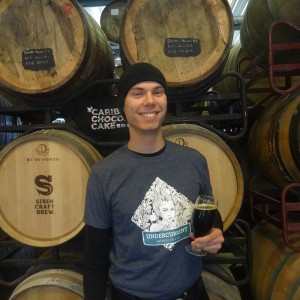 It is with great pleasure that we announce the new man at the top of our brewhouse, Markus Wagner. Hailing out of Dresden in Germany, Markus started brewing around seven years ago, learning his trade at Radeberger Exportbier Brauerei while going through a regional vocational school. After three and a half years and armed with the skills that would serve him well throughout his career, Markus headed over to Firestone Walker in California. There he worked on quality control, brewhouse operation, the barrel fermentation project, barrel ageing project and sour programme among other things, becoming an integral part of the team across all sectors. When heading back home a year later, he only got as far as Switzerland, this time picking up even more experience in completely different surroundings at Heineken SUI. The UK's developing beer scene in 2013 brought Markus our way, this time heading to Camden Town Brewery. Aside from playing a key role in brewing, cellar work and quality control, he also started a new barrel ageing program there, before taking interest in a new challenge here in Finchampstead. Markus said: "Siren Craft Brew was an opportunity I didn't want to miss and I'm delighted to take up the Head Brewer position here. I intend to carry on the exciting work and creativity that Siren are known for while bringing some of my own philosophy: brewing clean, crisp and consistent beer in a great environment." Markus will be overseeing the ongoing expansion and improvement of our brewery in Finchampstead along with taking control of the brewhouse and schedule. His current favourite Siren beer is Calypso, but he'll be making his mark with a Blackberry IPA which is being brewed later on this month. Join us in wishing Markus all the best for this next stage of our brewery's journey.
Share