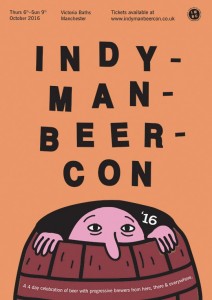 Death by Caribbean Chocolate CakeOn Saturday afternoon (2.45pm) we'll be running a very special tasting from our space in the Pineapple Room. Death by Caribbean Chocolate Cake will feature the original collaboration with Cigar City Brewing, the recently released Bourbon barrel aged version, and a very rare and exclusive Eisbock Caribbean Chocolate Cake. The Eisbock is a heavily concentrated version of the beer, where we've frozen off a portion of the water and removed it from the beer a number of times, concentrating and increasing the body, flavour and alcohol content. This is a very rare opportunity to taste these beers side by side, and an even rarer opportunity to try our Eisbock version. You can sign up at the start of the afternoon session, we hope to see you there!

Tickets IndyMan takes place from Thursday 6th - Sunday 9th October. Tickets are still available for the Thursday session from: http://www.indymanbeercon.co.uk/tickets See you there!