Each March we sit down to write something about the anniversary of Siren, and each time it's amazing to think that another year has flown by. We've brewed more than 50 unique beers since we turned five. We've attended hundreds of events all around the world. We've won Champion Beer of Britain. (Still feels strange writing that!). We've welcomed 1500 passionate investors into the company and laid in place exciting plans for the next chapter in our story. And so much more.

A mainstay though, is Maiden. Just as quiet contemplation in the barrel store can keep us from being wrapped up in the whirlwind of brewery life, so too does this beer remind us the value of time and patience when you want to create something special.

Thanks to everyone who has brought us this far. We're truly grateful for the support we receive from customers, friends, families, colleagues and peers on a daily basis. It's a unique industry that we're lucky to be a part of. Here's to the next six years!

But in the meantime, to celebrate our 6th Anniversary, let us introduce Maiden 2018. 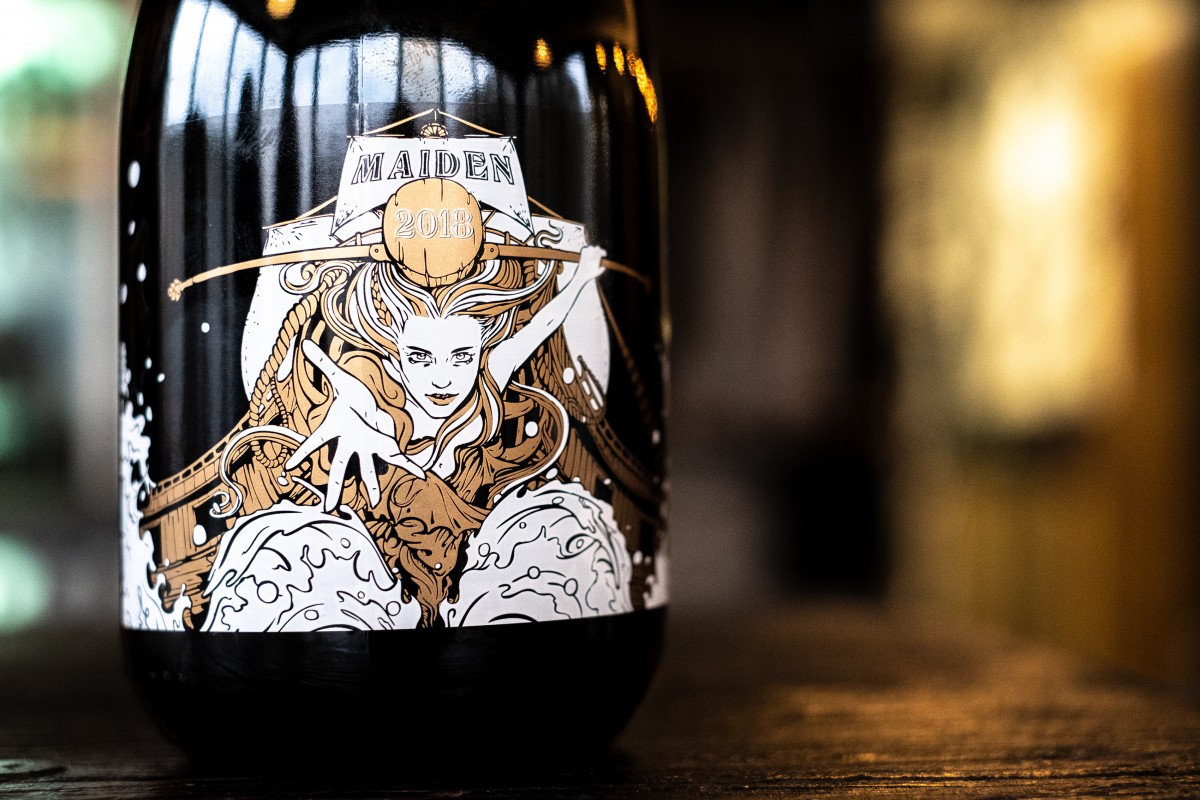 For those that aren’t aware of Maiden, it was the first ever brew at a newly awakened Siren, back in 2013. The American style Barley-Wine was a symbol of things to come, being brewed specifically to go straight into barrels.

Normally, when we barrel age a beer, it will sit in specific barrels to impart characteristics of the liquid once contained within them. For example, Bourbon Aged Primal Cut. With Maiden, we chose a variety of barrels with the idea of creating different blends further down the line.

1 year later, the inaugural Maiden was blended and the Maiden project came to life.

We use a variation of the solera system, so any time we draw Maiden from a barrel we'll top it back up, leaving 10% of aged beer in the barrel before doing so.

And so on a particularly snowy day in at the start of February 2019, we came together to work on the blend for Maiden ’18. With a few Sirens Awaken investors joining the team, around 20 of us each worked to create what we thought to be the perfect blend.

These blends were then narrowed down to a chosen 5 favourites. From those 5 favourites, 2 blends came out as equal winners. Both blends had amazing individual qualities, one packed an enormous aroma, and the other had a glorious depth of flavour.

The pressure was then on our barrel manager, Steve, to formulate a final blend that was true to the themes, flavours and barrels that were most prominent in the winning blend.

Maiden 2018 has a beautiful aroma of caramel, almond and oak with some fruit notes, giving way to flavours of vanilla, raisin, spice, sherry, nuttiness and a delicate hop bitterness. It drinks smoothly with a soft mouthfeel, warming sensation and a long, complex finish.

It’s worth noting that this blend isn’t as simple as ‘Red Wine Barrels’. For example, there were several red wine barrels available, and each had different notes and flavours. The same for the bourbon, rum etc.

We've never published this before, but we're actually able to share the split of fresh vs aged beer, as well.

We hope you’ll love this year’s Maiden as much as we do here!

And so if you’re hoping to get some, then today (Wednesday 13th March) sees the first pour! This is at a very special “Blend your own Maiden” event at Mother Kelly’s in London. Your ticket price will include everything you need to give blending a go, from 4 single barrel versions of Maiden.

After that, starting from Thursday 14th and running over the weekend, there are events all over the country, far and wide, to celebrate our 6th Anniversary and more importantly, drink Maiden.

Investors can already buy Maiden on the webshop, the rest of you will be able to place orders from Sunday 17th.

Maiden was invented to represent a journey, over time. We hope that when the cacophony of flavours hits your tongue that you’ll be whisked off in the memory of years of barrel-ageing and beer history.