Here at Siren, we love our flagship range. We also love to experiment with them. In the past we’ve made ‘ramped up’ versions, such as Tidal Wave (an imperial Soundwave) and Vu Du Yu Lu (Double strength Yu Lu). We’ve also used them as a basis for other adjuncts. In 2018, for example, we had a series of “Soundwave Sessions” beers, taking Soundwave and brewing it with a lower ABV and with a variety of additions.

Most recently, we experimented with Broken Dream, brewing a Cacao & Hazelnut version and a Rum & Maple Wood version. With these proving so popular (and selling out online in 1 day!) we decided to once again experiment with our 6.5% Flagship Breakfast Stout and 2018 Champion Beer of Britain. 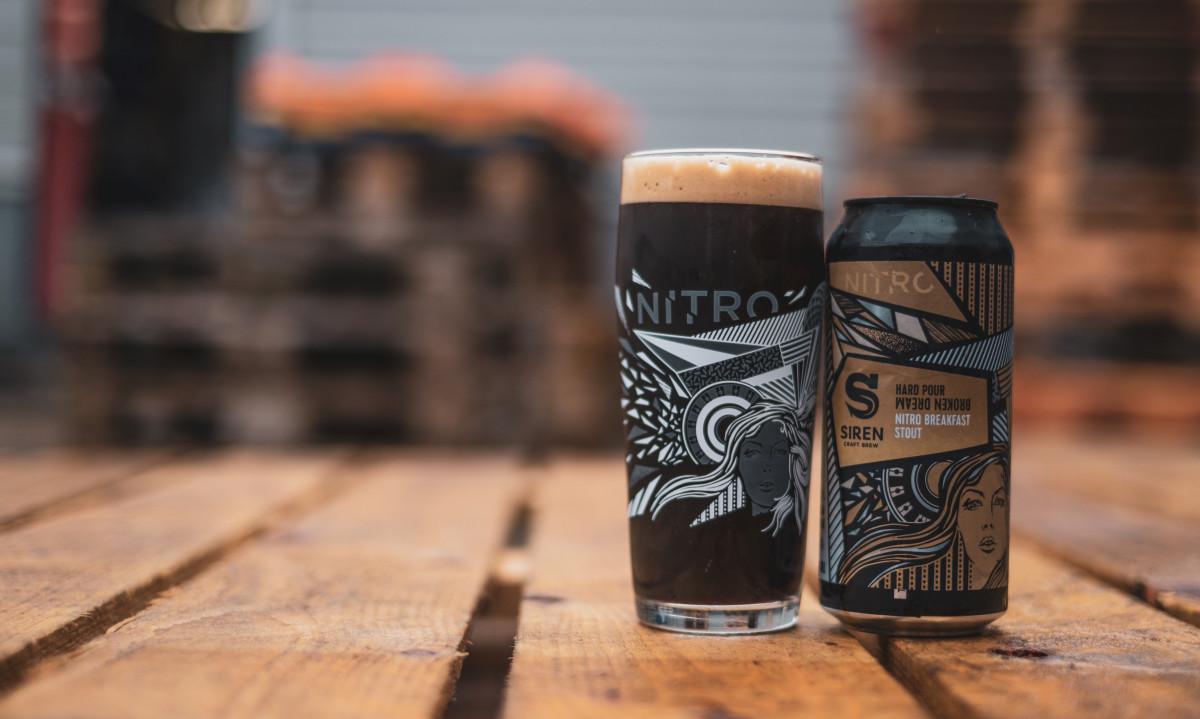 What on earth is a nitro version, I hear you ask. Well, good question! When we installed the canning line back in 2019, we took the opportunity to bring in a liquid nitrogen dosing add-on at the same time. We’ve been eager to try it out ever since, but had to prioritise optimising the line first. It’s now running better than ever, so the anniversary of Broken Dream picking up Supreme Champion Beer of Britain seemed like the perfect opportunity to kick start our nitro adventure.

The nitro process starts long before canning - there are a number of considerations. With Broken Dream, the recipe was altered in 2 ways. Firstly, we used more wheat than normal to get additional protein into the beer. This added protein aids the head retention that is so important to nitro pours..

The next alteration was to use more coffee than usual. We included an additional 50% quantity of Climpson & Sons “Baron” espresso - adjusted to taste. As nitrogen beers create a thick and creamy head, this actually traps some of the natural aroma of the beer. With that in mind, we want to try to increase those profiles to push the aroma to the max. The recommendation is to drink through the head, which aids mouthfeel and releases aromas as you sip.

We’re also looking to control the level of carbonation in beer prior to packing, aiming for below 3g per litre (for context, cask beer would be somewhere in the region of 4g per litre). This allows more space for the nitrogen to work its magic.

Normally, we force carbonate canned or kegged beers with CO2 (Carbon Dioxide) to give them the classic bubbly mouth feel we know and love. The ‘Nitro’ process replaces some of the CO2 with N2 (Nitrogen). Nitrogen is largely insoluble in liquids, so the beer takes on a really creamy character that’s very smooth to drink.

The nitro doser sits in between the filler and the sealer. Once a can is filled, we dose it with a small amount of liquid nitrogen. This is exactly as you’re imagining it, and needs to be dealt with careful consideration. When the tiny drop of liquid nitrogen hits the beer, it almost immediately boils, so we need to seal the can as soon as possible. This turns the liquid nitrogen into gas.

We’ll also go through all our normal rigorous QC checks during this time, to make sure the beer is in tip top condition and pouring as intended ready for release.

Now the beer is packaged, what does ‘Hard Pour’ mean? Well, to get the full experience, we recommend you break from the tradition of a carefully poured beer in favour of turning the can almost upside down and letting the whole thing empty. You’ll have to trust us, but the beer will fill the glass, not pour over, and then cascade into a beautiful settle. The beer is creamy and super smooth to drink, with big bold flavours coming through. We actually think it’s somewhat reminiscent of drinking Broken Dream on cask, even better for its anniversary launch. 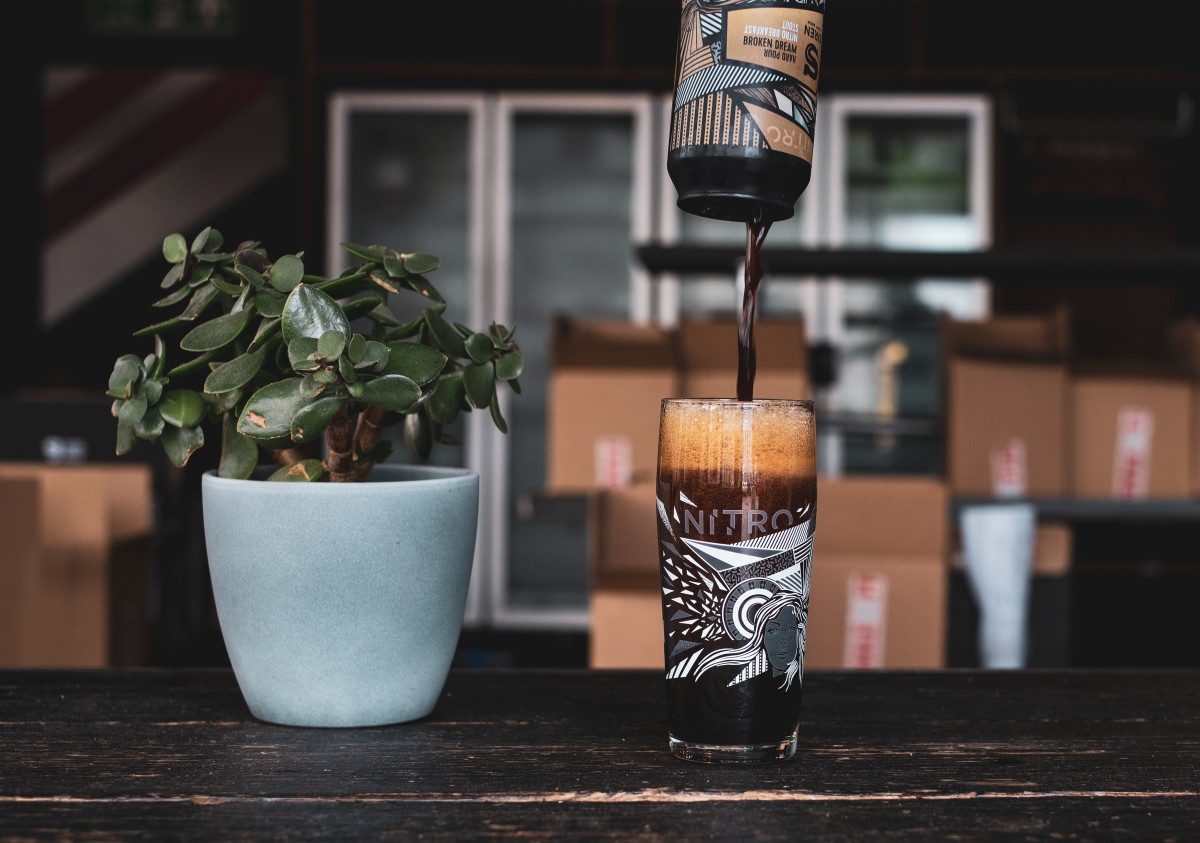 You may find these cans slightly firmer to the touch than our normal releases. Fear not, this is not refermentation or anything that’s going to cause issues, it’s simply the sign of a successfully nitrogenated can.

We’ve got some glasses designed especially to give the beer the best possible cascade effect and head retention, available to purchase alongside the beer. They’re also designed to perfectly fit a 440ml can pour! Handy, and of course we recommend using them for best results. The beer will still taste great in other glassware, but you may not get the full nitro experience.

Now as you can imagine, there are a lot of variables to consider when preparing a Nitro beer, for example, the levels of carbonation vs liquid nitrogen, the recipe of the beer and even things like the temperature of the beer at the time of canning. This is our first attempt with Nitro, and we’ve learnt a lot. It’s an exciting process and something that we’re going to continue to experiment with.

Broken Dream is just the start of our Nitro journey. Next up, we have a new take on a Red IPA which we’re calling ‘Twin Flames’. We’ll be packaging two versions of the same beer - one carbonated, or ‘classic’, and one with the nitro treatment. We’re looking forward to seeing some side-by-side tastings between the two, taking on feedback on how the profiles differ and how you like them.

Look out for those in the coming months!

Hard Pour Broken Dream is available from Friday 21st on the Siren Webshop and in our Finchampstead Tap Yard. It comes paired with a special glass, designed specifically with this beer in mind!

Nitro Broken Dream has arrived! An indulgence of chocolate and speciality malts, our flagship stout is smooth, unctuous and moreish. It's brewed with lactose for balanced sweetness, along with carefully selected coffee. These cans are dosed with nitrogen in line for incredible mouthfeel.

Pour hard and fast for the full cascade effect.