Its all about the Thirds - and Halloween!

Its been a while since we gave an update longer than 140 characters, and man it's been busy.  We have installed 2 new tanks, commissioned our bottling line, brewed a white stout with Mikkeller, brewed a pumpkin spiced beer, brewed a beer with Magic Rock thats ageing in barrels, released a new malt driven cask only beer, added the next calypso range, partied in numerous venues including Leeds, Glasgow, Rome & London, and there is still more. (Indeed - Leeds to start this weekend for a bottle tasting at Beer Ritz followed by a Beer and Dessert pairing at the Rutland Arms in Sheffield) I am sure by now, most people know we have a Halloween Party on the 1st November. We are super excited about this, as we have along our favourite burger guys in The Original Patty Men, we will also have prizes for best costumes (and you have to come to see Ryan dressed as a witch), and we have great beer from Magic Rock and Buxton with Rich coming along to mingle and pour a little also. The day before the party, us and the makers of two of the best IPA's in the UK right now will be bringing together the recipes of each of our flagship IPA's in one mind bending melting pot of mixed up malt bills, huge hop lists and very precise hopping regimes.   The Rule of Thirds takes 1/3 of each of our individual recipes and process' & promises to bring together the best of each of our flagships and come up with something greater than the sum of the parts. Which is no small boast This should be available in cask keg and bottle towards the back end of November, so keep an eye out for that. You will shortly find that we also have the latest batch of Barrel Aged Broken Dream about to hit the shelves in the form of Jack Daniels, Bufallo Trace and Jim Beam.  Gratuitous bottle shot below. 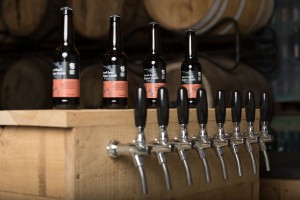 Thats also a picture of our bar that took a hammering at our last party.  If you haven't got your tickets yet, don't miss out, its going to be great fun.
Event management for Siren Halloween Partypowered byEventbrite