Phew, we have been manic. That's no excuse for a lack of posting and updating I know, but we will make up for it this week. We have been kept busy by the thirsty Swedish beer lovers that following our homebrewers competition tie up with Omnipollo have become rather excited about we are doing.   We have had a fantastic time collaborating with Henok & Karl from Omnipollo and Rick the competition winner and to say we are excited about launching this beer is an understatement, but that's for another day. Along with topics for another day are our Australian version of Soundwave, an update on the Rainbow IPA project with Magic Rock, Buxton, Kernel, Brodies, Partizan and Hawkshead, whats the plan stan for our meet the brewer at Hanging Bat and plenty of other stuff. 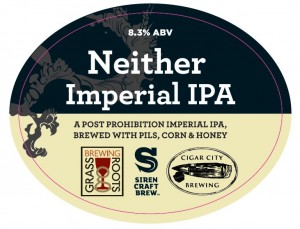 However today is the day that our collaboration beer with those incredibly cool guys from Cigar City and Grassroots left the brewery. Neither is an 8.3% IPA that packs a punch. Brewed with Pilsner malt & corn to provide a crisp dry base, a heavy layering of the juiciest american hops and a large dose of lime flower honey, this is definitely a beer that doesn't sit on the fence.   We are only releasing this on keg and bottle, with kegs starting to go out the door today, and bottles hopefully next week. We are very excited about this beer and the Drafthouse Westbridge along with The Hope in Carshalton were to be the first out of the doors today. The Craft Beer Co and others will be not far behind.
Share
RELATED TAGScigar-citycraft-beerhoney