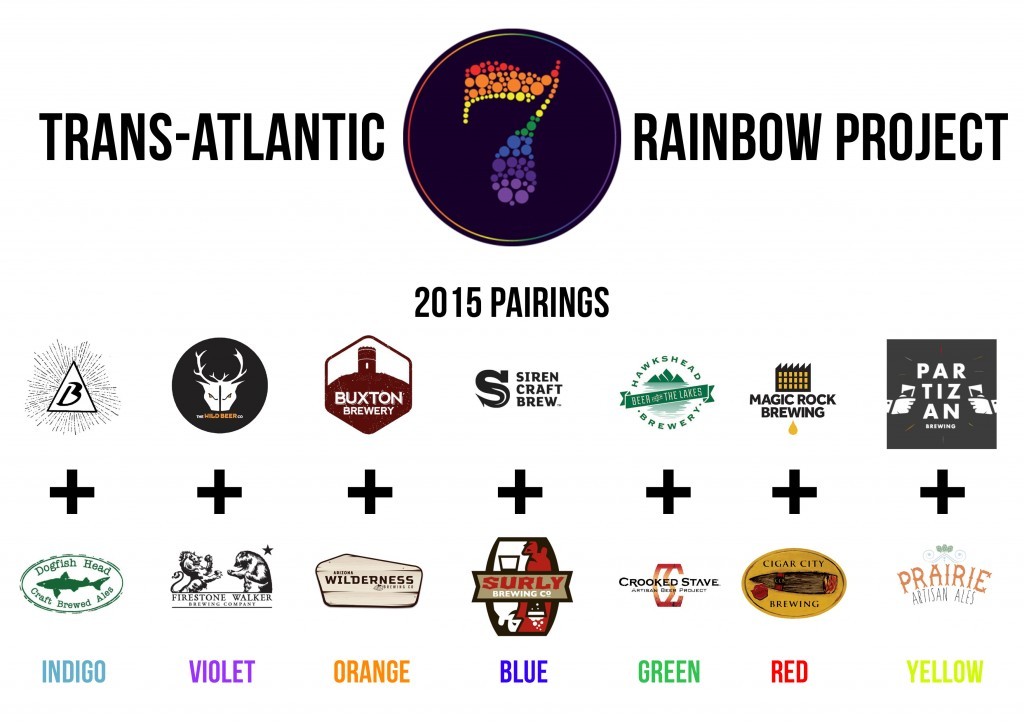 The Rainbow Project began in 2013, when we brought together seven of our favourite breweries from the UK, all of which were assigned a colour and asked to brew a beer loosely based around that colour. Last year we randomly paired each UK brewer with a European counterpart (plus Evil Twin), which produced some spectacular results. Launch events took place in Europe and the USA and the collaborations formed friendships and knowledge-sharing connections that are still going strong today.For 2015, now in its third outing, we're going trans-atlantic, pairing 7 of the best UK breweries with 7 of the best from the USA. The collaborations are all listed above, it's fair to say we're pretty excited about the creations that will be born this time around! We'll be releasing a limited edition case of all seven beers with a unique glass, plus celebrating the project with some very special launch events. Along with showcasing the seven special beers, the US breweries have arranged for some of their own brews to land on our shores to make the events even more spectacular. So if you fancy trying the likes of Dogfish Head's Sixty-One, Arizona Wilderness' Superstition Coffee Stout, Surly's Misanthrope, Crooked Stave's St. Bretta (Pomelo), Cigar City's Cucumber Saison or Prairie's Okie, you'd better come along...

International Rainbow Project Northern Launch Event Hosted at Magic Rock Tap Willow Park Business Centre, Willow Lane, Huddersfield. Saturday 19th September / 12pm - 10pm For the Northern launch of the Rainbow Project, Magic Rock Tap will be hosting all seven rainbow beers on tap PLUS two beers from all the US brewers and an extra beer from the UK brewers, so there will be TWENTY EIGHT BEERS on tap for you to choose from, this will be a ticketed event, limited to 500 places. Street food from : Yorkshire Pizza Kitchen, Yorkshire Pit and Mac Daddies. More details available here on the Magic Rock Blog. £10 advance via Eventbrite (+ Booking fee) / Includes entrance to the event + commemorative glass + seven tokens. Tickets are now sold out, but 50 will be made available on the door.

Any other Rainbow Project events will be announced here in due course. We hope to see you at one of them! Keep up-to-date on Twitter using the hashtag #RainbowProject.