Back in December 2018 we unveiled an ambitious plan to take the next big step in the company’s history. We knew the time was right to put our beer into cans for the first time, and scale up sensibly to meet demand and work towards our wider ambitions as a brewery, community champion and employer. Here’s what happened next, and what’s happening now.

We knew external investment was required to move us forward in the right way, so we turned to the crowd. Thanks to more than 1,500 passionate investors we raised more than £1.2million - way beyond our original expectations. Since then, we’ve been working hard behind the scenes to make our plans a reality.

To begin with we needed some more space, and managed to take an additional 2,500 sq. ft. industrial unit. For those that have visited the brewery, you will recognise it as the ‘fourth one along’ next to our existing site. We also needed additional tank space. Four new 240hL fermentation vessels are built and waiting to be installed. We’ve also brought in a new 100hL Brite Beer Tank (BBT). Some smaller, but no less important improvements are also in progress. We have a new Hop Cannon, which will enable more efficient and impactful dry-hopping. We’ve also laid out our new lab facility and hard-piping plans. It’s all coming together nicely.

But our mission centred around a state-of-the-art canning line, which is now taking pride of place in Unit 3. The CFT 10-head line we chose has the potential to exceed our current bottling QC levels, which we already set very highly. It will have the capacity to fill up to a whopping 6,000 cans per hour. We also have a labeller, to give us the flexibility of smaller runs. Our canning line is now up and running!

We’ll be canning both 330ml and 440ml formats, the latter being introduced over the next couple of months. Our flagship range will be in printed 330ml cans (more on that later). Our one-off, seasonal and collaborative releases will be labelled (more on that, too) and packed into 330ml or 440ml formats at our discretion. We’re conscious of the price-points that come with the larger formats, and appreciate that some styles are better suited than others. Choice is good!

A Brand With A Story 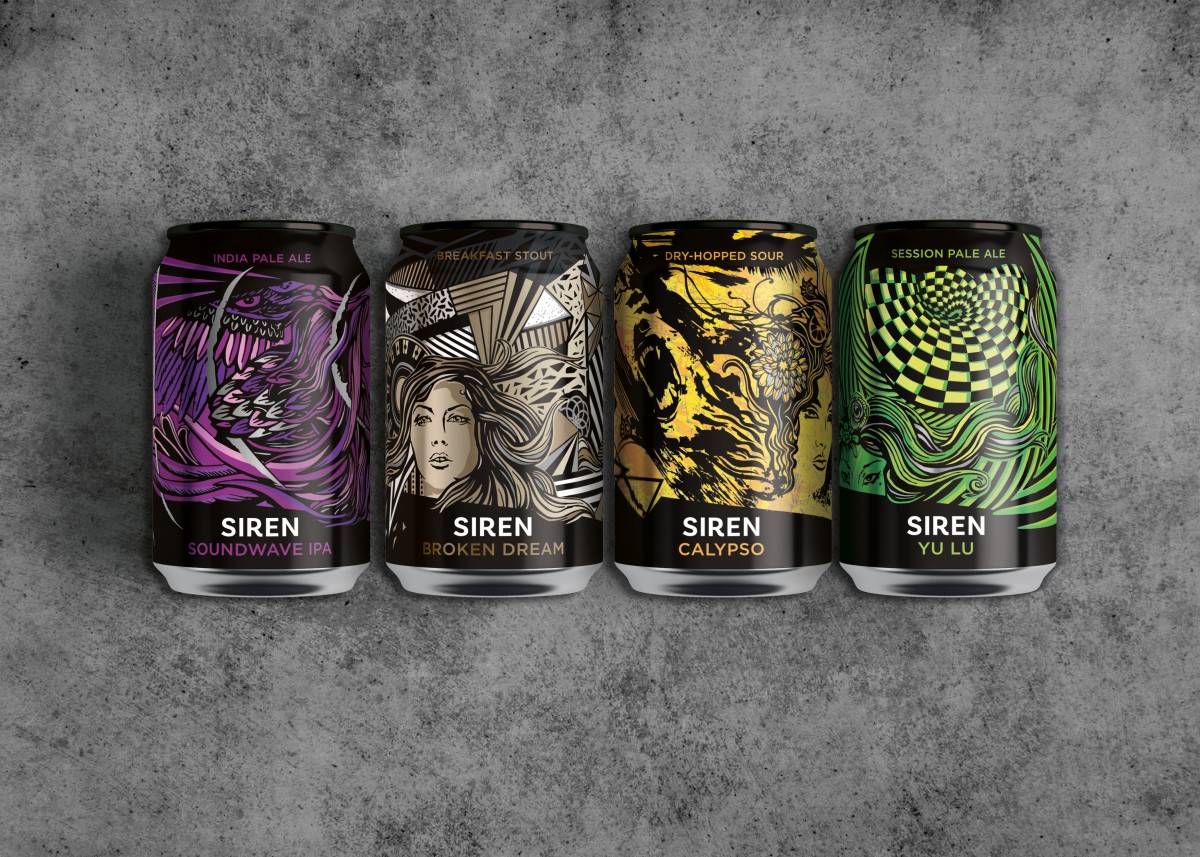 The introduction of cans to our range presented a huge opportunity to take a look at our branding. The benefits of cans are well documented, but the increased canvas size available to designers and the effect this has had on shelves and in fridges cannot be underestimated.

Wider than that, our packaging has not really developed for a number of years. The beer scene has changed dramatically in this time, and so have we. We owe a lot to our branding. And while there are elements that we love and have stood the test of time, we also knew that this was the time to evolve.

This project was not taken lightly. We spoke to illustrators, designers and branding agencies near and far, of all different sizes and specialities. Will of Studio Parr was the perfect fit - mixing years of experience and bags of talent with a nimble, start-up ethos and a passion for beer and design that we share.

Our brief was to stay true to the Siren storytelling ethos, paying tribute to the illustrative style that has served us so well, while introducing design that shines in the current market - and truly represents the love, care and dedication that goes into making our beer. We also felt the time was right to introduce a bit more colour to our range, which was so often monochrome in delivery. So, no pressure. 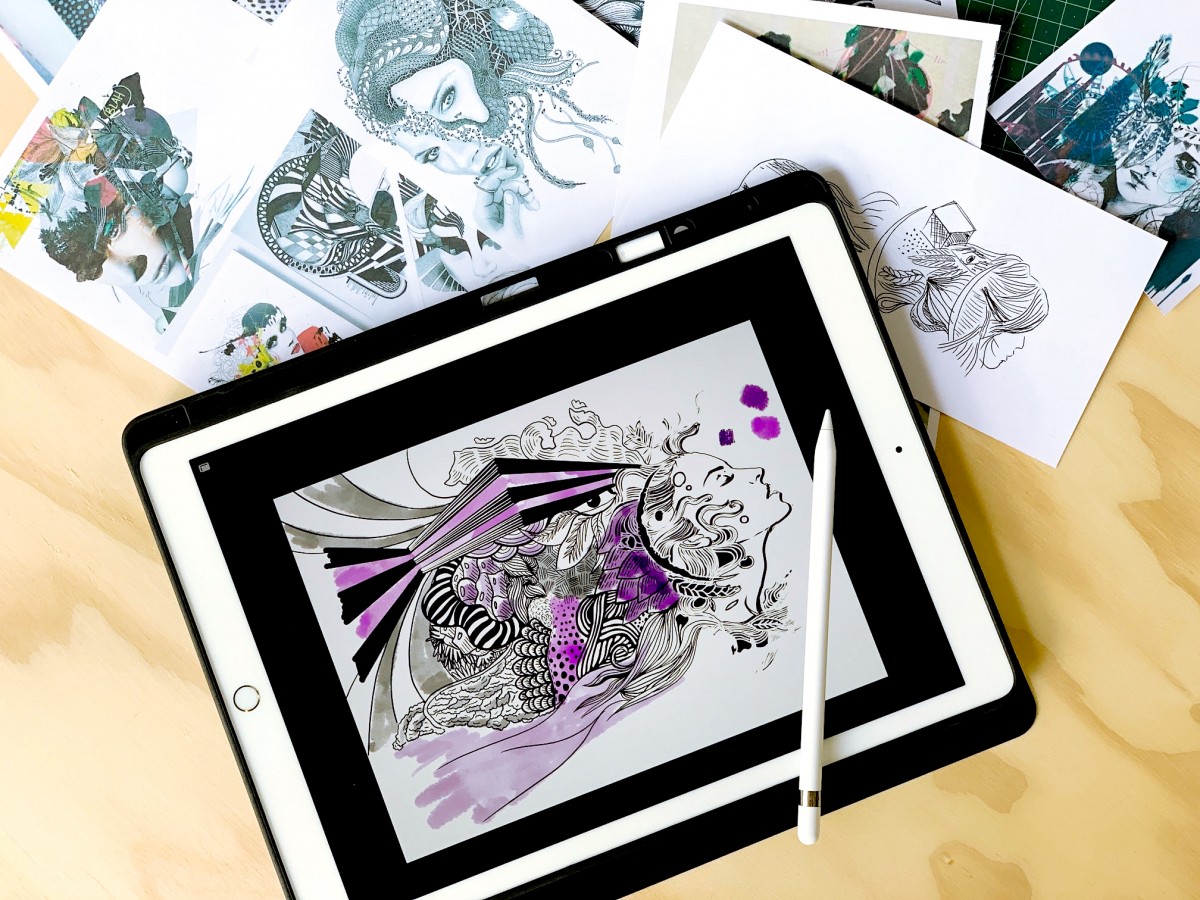 The original Soundwave development concept that inspired our project.

As you may know, the sirens of Greek mythology inspired Siren Craft Brew as a concept. Just as their voices were said to entwine into a complex, layered melody, so do the ingredients that go into making great beer. The idea stemmed from Darron’s passion for the modern, flavour-forward beers that began to emerge around 2010. Despite his best efforts to resist, the call of starting up a brewery persisted. The famous Siren "S" even has a subtle barb at the end - you’re hooked!

Our flagship range was illustrated with sirens inspired by the beers, with elements like hops, coffee beans or oats flowing and circling in the designs. But six years later, we couldn’t help but feel that they were a little bit restrained in format and scope.

Our new direction came to life. The story starts with the siren, but that’s just a beginning. A stream-of-consciousness style canvas is beyond, delving into the character, the story and personality - fictional, abstract and intertwined with the liquid inside.

So without giving all of our secrets away, here’s what we came up with... Soundwave was the natural starting point. Our flagship beer, out there winning hearts, minds and tastebuds, and showing the world what Siren is all about. This canvas celebrates the beauty of song and captures the energy of the sea and sky. It’s inspired by the fantastical tales and prodigious feathered illustrations of old. Epic in drinking, epic by design. 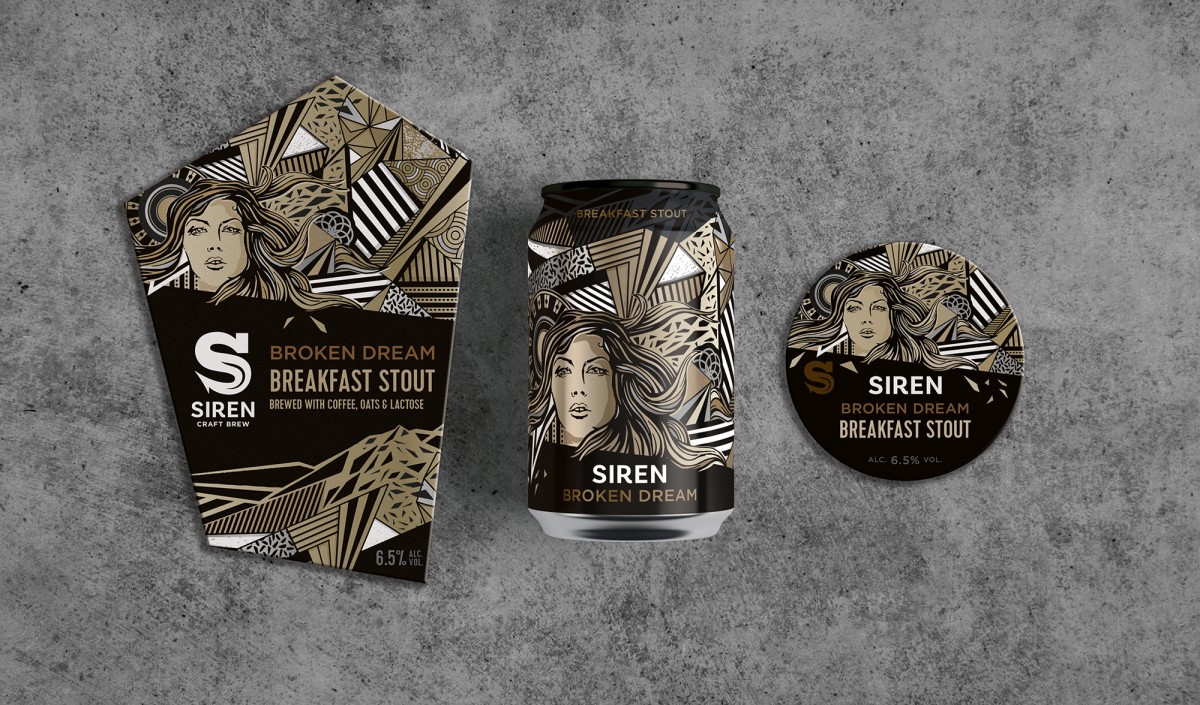 "You never remember the beginning of your dreams, do you? You just turn up in the middle of what's going on."  With heady aromas, rich flavour and velvety smooth mouthfeel, one sip of Broken Dream and you're somewhere else. Our Broken Dream canvas plays with the concept of time and the blurred lines between dreams and reality, consciousness and unconsciousness. Geometric shapes meet abstract ideas and deep sleep meets sharp awakening. Metallic gold tones represent the indulgence that awaits inside. 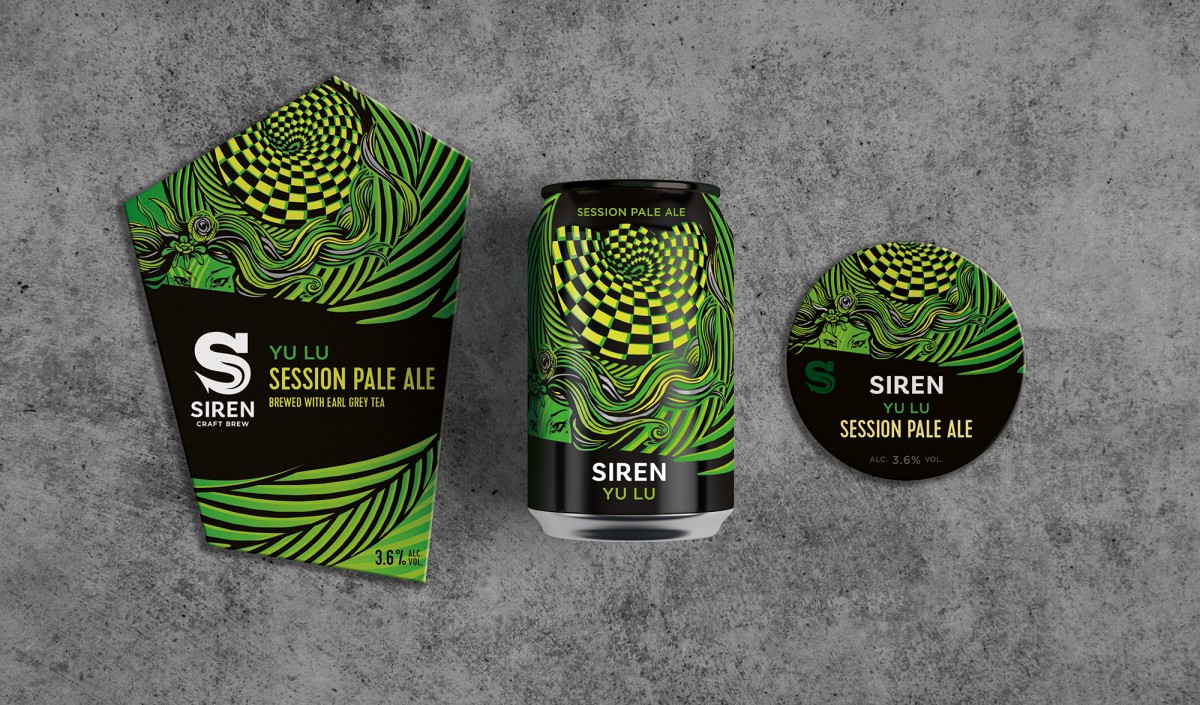 Tricks and riddles are frequently explored in classical mythology - but can you solve the puzzles of Yu Lu? This pale ale is about delicacy, subtlety and nuance. It’s not ordinary and it’s not straightforward. The name plays on the ancient culture of tea, while we balance Earl Grey with zest and hops to bring flavour without high alcohol. It may take some time to figure out, but that makes it all the more rewarding. Tip: Staring a bit too closely at this can while enjoying a beer or two could make it all the more tricky! 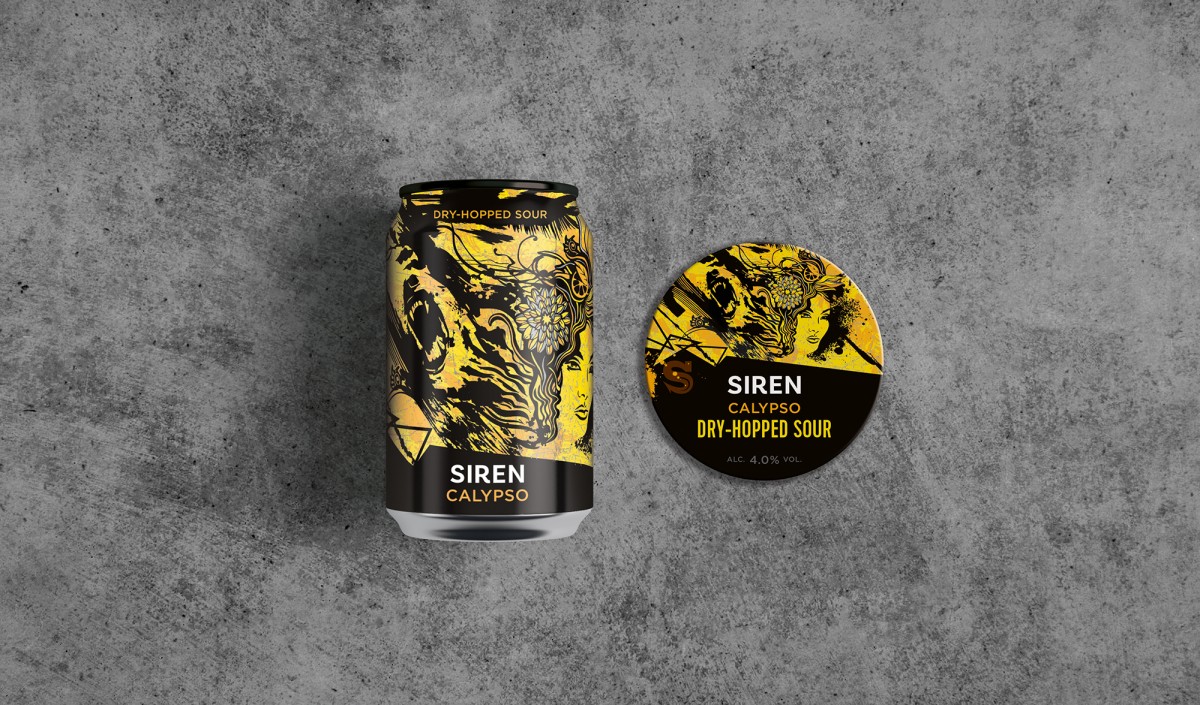 Calypso was known as the nymph with the sharp tongue, which seemed quite an appropriate influence for our mouth-puckering flagship sour beer. This canvas is a visual representation of the ancient story - where shipwrecked Odysseus was imprisoned on Calypso’s island. It’s full of emotion, tense with claustrophobia and tropical with colour and scene. While interpretations of the myth are diverse and numerous, we’d like to think that Calypso is now the definitive desert island beer. 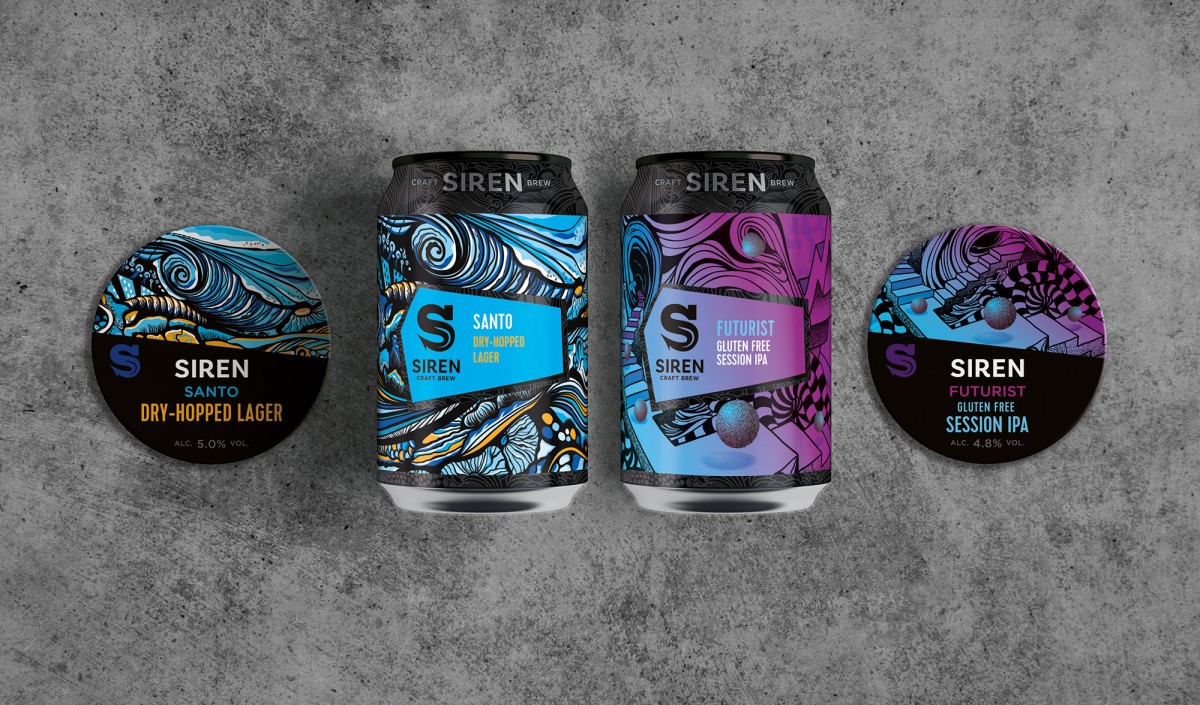 One of the biggest challenges and opportunities facing modern breweries is devising, brewing and releasing new beers on a regular basis, not least because each new beer requires new artwork. As a small brewery, we can’t invest hugely in illustration for every beer (nor is there time), but likewise we’re desperate not to compromise and undervalue the work that goes into the brewing.

It was one of the areas we were most keen to improve upon - doing our myriad of new beers justice in design and making sure they felt part of the same ‘family’ as our flagship brews.

You may have noticed that we’re often referring to our flagship illustrations above as ‘canvasses’, and that’s exactly what they were designed to be. Although you get a striking snapshot on the can, the works expand well beyond those crops, giving room to explore further and further into each world.

Those extended canvasses will form the backdrops to our new releases. They’ll be chosen by themes and expanded over time. You’ll also notice cut out label shapes giving way to a beautifully textured base can design. Stay tuned for plenty more where these came from! 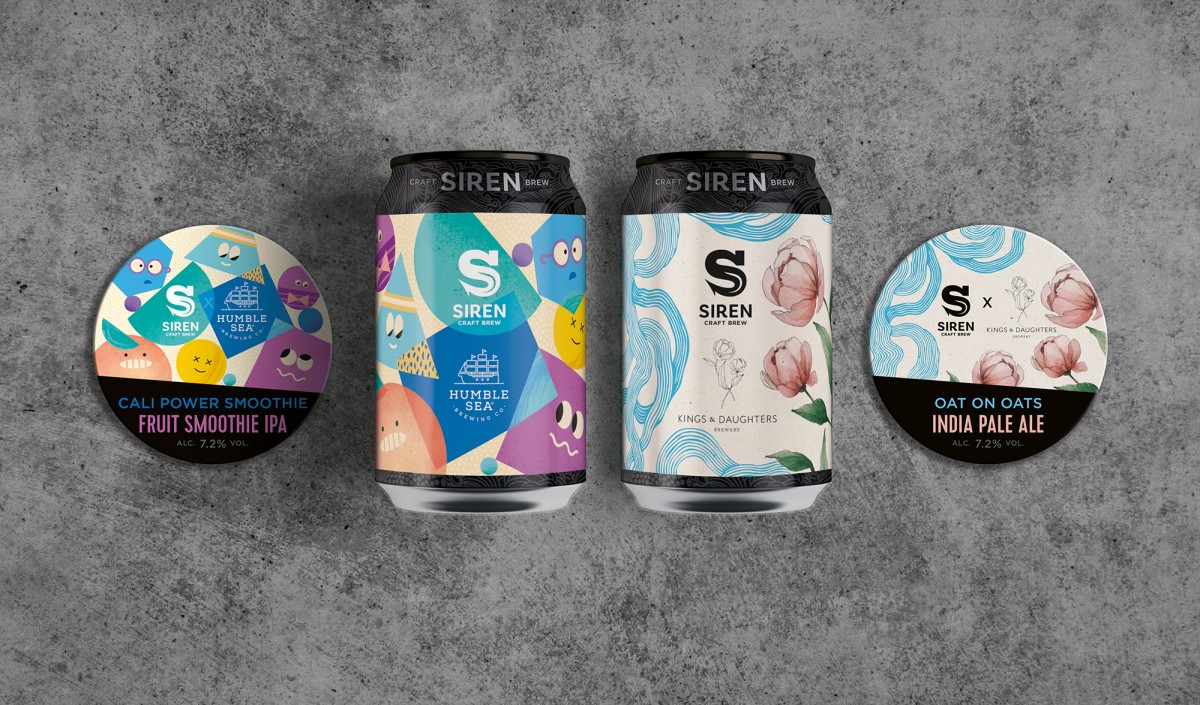 Similarly, collaborations have been a huge part of Siren over the years and continue to offer us some of the best experiences in brewing today. One aspect that we’ve never been quite able to make the most of is the collaborative design opportunity. We have now devised a format that will take away the shackles. Whether the collaborations be from our own industry or well beyond, we’ll have the flexibility to bring elements from all sides to the forefront.

We’re pleased to reveal that our first two canned collaborations are with the incredible Humble Sea, and close to our hearts Kings & Daughters, the new brewery of our previous Head Brewer, Kyle.

We could not be more happy with this direction and can't wait to have more talented designers and illustrators making their mark on our beers. 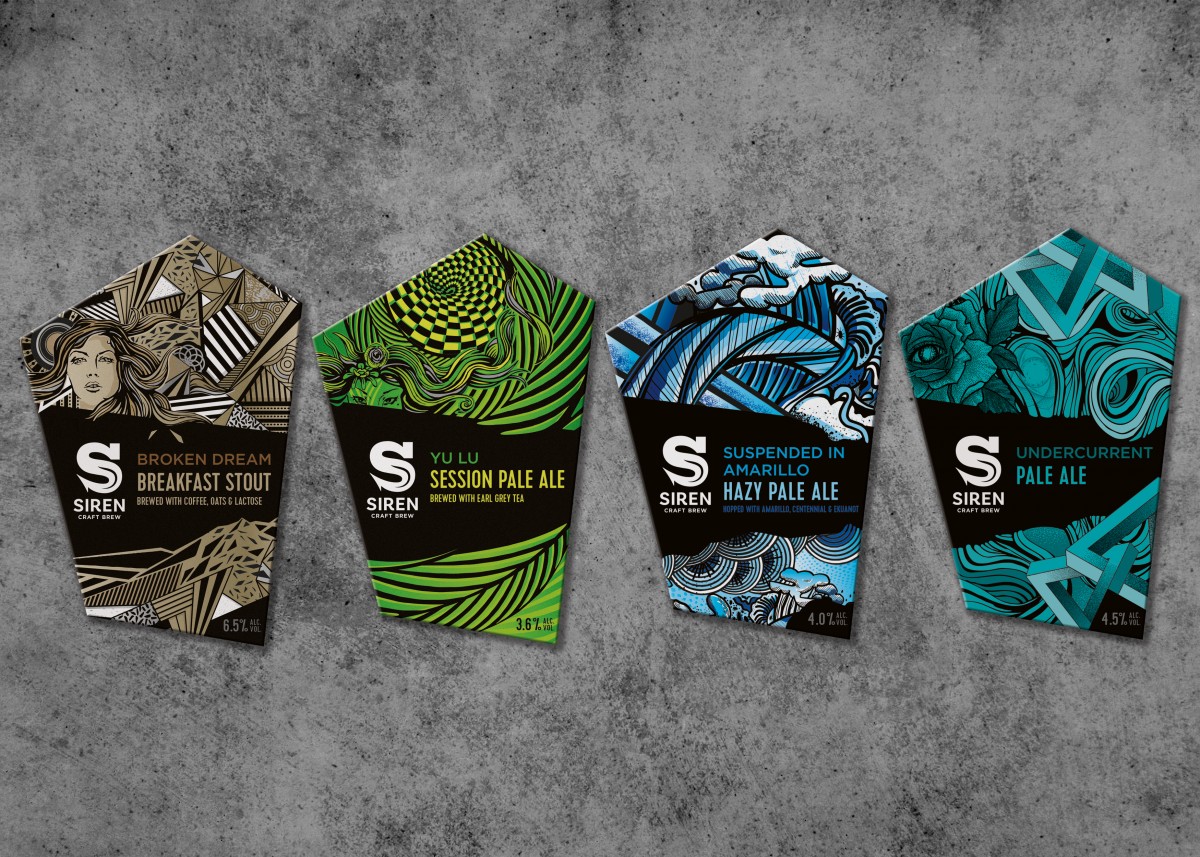 Thank you for reading! We’re making a huge step, but continually attempt to stay true to our roots. We’re ridiculously excited to be able to offer Siren cans in time for (hopefully) the majority of the summer, and can’t wait to see them at BBQs, music festivals and beyond.

Thank you for all of your support over the years, particularly those who invested and helped us to make all this happen. It’s an amazing journey, and we can’t wait to start this next chapter.

We hope that you're all excited to get your hands on some cans! The first batch should be available in the Tap Yard from 5pm on Friday 12th July. They’ll be available online and to the trade from Monday 15th July. Of course, beer quality takes priority and new equipment can take time to bed in, but we'll do our best to keep the releases flowing over the next month or so.

Big thanks from all the team at Siren!

Welcome to tropical hop heaven. Soundwave is eminently drinkable, full of flavour and subtle with bitterness. Our most famous beer pours with an inviting haze, while big-hitting American hops deliver fruit notes in abundance and a trademark resinous finish.