We’re building up to our event of the summer, Time Hops, but wanted to lay out in detail what Time Hops is as a project, and what to expect from the event. We’re truly excited about it all, and we want you all on board. We’ve broken this down into sections, and there’s a full FAQ below.

What is the Time Hops concept?

We love hops. Everyone has that moment, that beer, where hops became part of your conscious beer choices. With this project, we’ve picked out four of those such beers to influence four new brews - our takes on the style, paying homage to the hop. We’ll tell you more about the beers over the next month, and there’s a bigger explanation of the project below.

Time Hops #2. Simcoe is a hop dear to our hearts, and we couldn't work on this project without telling its story. To do that, we went right back to its roots and got in touch with a very inspirational brewery to us. Champions of Simcoe, pioneers of Double IPA, and brewers of (probably) the best Simcoe-led beer in the world, Russian River will be helping us celebrate this incredible hop.

With Centennial we're hopping deep into West Coast IPA territory and the start of a journey where hops and beers both began to be pushed to their limits. “Super Cascade” as it as sometimes known, lead the C hop charge of bitterness, which we'll be delving into with the Craft Beer Channel. We're very lucky to call on Bear Republic Brew Co for their insight on Centennial. Their iconic beer, which we'll be quizzing them about, was the first that Siren founder Darron had when getting off the plane for the Craft Brewers Conference in San Diego all the way back in 2012. The rest, as they say, is history.

And what is Time Hops the event?

Just like Project Barista in previous years, it’s a festival themed to the four beers in discussion, but with lots more going on. There’s 30+ lines of beer from Siren, local friends and breweries around the UK, plenty of incredible street food, live music and more. Read on for more of a breakdown! It’s on Saturday 30th July from 2pm - 10pm at Reading Student’s Union 3Sixty Bar.

So what food will I be eating?

We thought “If we could pick our dream food vendors, who would we pick?” and then we remembered that we could, so we did. We’re absolutely delighted to be welcoming BURGER BEAR to the event. Burger Bear Tom has been wowing with his burgers for a while now. Tim, writing this blog, travelled from Reading into London, just because Burger Bear had a pop up in a pub. Totally worth it. 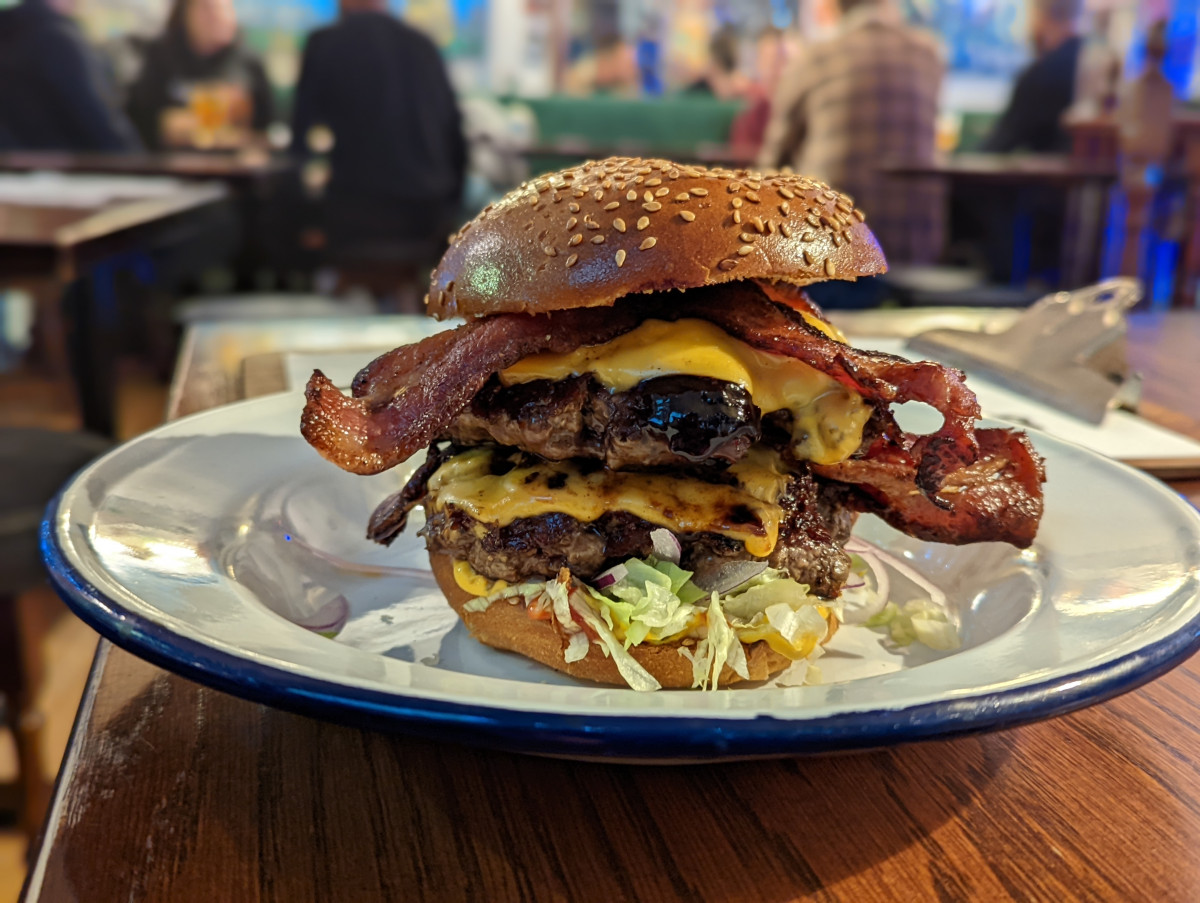 We’re also joined by FINK, who have been catering for the people of Reading & Berkshire with amazing food, whilst promoting mental health awareness. Their key charity partner, No5 Young People, are a reading based charity who provide life changing counselling and mental health services to Reading's young people.

There may also be another treat in store, so watch this space!

Ok, so most importantly, tell me about the beer!

Of course, first and foremost this is a beer festival. We’re taking over the 3Sixty bar at Reading Student’s Union, which provides us an amazing space - check that out below. We’ll have at least 30 lines of beer pouring, with beers from Siren, local friends and guest breweries from around the country. Confirmed so far are:

Brew York
Fierce Beer
A host of local favourites
More to be announced!

Tell me more about the venue…

We love hosting parties at Siren, but for this we wanted more space to be able to offer a bigger event, with more going on. There’s a stage that we’ll have dedicated to live music, a DJ area, and plenty of great outdoor space. Plus, it’s easy to get to (see the FAQs below). They even host weddings at this venue, so you know it’s nice.

So what else is going on?

Well, if all that beer and street food isn’t enough for you, we’ll have a host of entertainment. This will include acoustic acts, and a headline band on the “main stage”. We’ll also have Rum & Donuts DJing throughout the day. Rumour has it, Burger Bear is also bringing the party.

Well, if you want more, we’re also teaming up with the guys from the Craft Beer Channel, so we’ll have some talks and all the lovely nerdy beer stuff going on.

And this all costs a fortune, right?

Ok - Here’s a quick fire not so Frequently Asked Questions

It’s a student bar - Won’t it all be Carlsberg and snakebites?

No, we’ll have 30+ lines of beautiful craft beer.

Can I volunteer to work to get a free ticket?

Yes, get in touch if you want to volunteer - but note that does mean you’ll be working!

They can, but bear in mind that it is still a busy beer festival, with music and drinking. Contact us to get a kid’s ticket.

Can I get a refund if I can't come?

Yes, you can email us and we'll get it sorted.

Will the tokens work against wine or other drinks?

Absolutely. As well as all the amazing beer, there’ll be a range of wines, spirits and softs.

Can I go out and come back in?

There won’t be any re-entry, once you’re in, you’re in and the event runs from 2pm to 10pm.

It’s the Community Shield that day, will you have it on?

Possibly - there’s TV’s there, and we’re working on having at least one of those dedicated to the game, although it’ll probably be on mute.

Can dogs come in?

We love dogs, but this event is guide dogs only. (But please come to the Tap Yard with your dogs)

How far is the venue from the train station?

It’s 2.1 miles, which according to Google Maps is a 43 minute walk (pretty much down one road, it’s an easy route), a 10 - 20 minute drive (based on traffic) with plenty of taxis available at the station, or a 24 minute bus.

Alternatively, it’s a 26 minute walk from Earley station or an 8 minute drive from there.

Best bet is to get the “Ola” or “Free Now” apps, which are like Uber - also there’s a rank by the station.

From the station, you can get the 21 Claret, the Leopard 3, Leopard 8, 19 Little Oranges, 17 Purple or 4 Lion - These names make sense once you’re in Reading. Each has a short walk once you get off - our advice is to use Google Maps.

Will there be ping pong?

We’re hoping to have it, but if it’s winner stays on, the Siren team aren’t going to get anything done because we’re really good at Ping Pong.

Where’s good to stay nearby?

There are loads of hotels in Reading and nearby, as well as options on AirBnB.

The venue is big, and the live music is only in one room, so if it’s not your thing then you can escape it. There’s also a great outside area.

Is there an outside?

Yes, there’s a great outside area.

Can I buy an all inclusive ticket?

Can I get takeaway beers?

Yep, we have full access to the venue’s facilities, which means stocking all our beers in their fridges - train beers for the win! You’ll also be able to order beers for us to deliver to your house.

Can my band play?

Send us your stuff and we’ll have a look.

Will the Tap Yard be open still?

It will, but come on… get yourself to Time Hops.

Are The Time Hops beers exact re-brews of their influences?

Nope - but they will be similar takes on the style. The breweries involved are being very generous with their time and taking an active role in making sure the beers are an amazing expression of the hops.

Can I get the Time Hops beers if I don’t attend the festival?

Yep, they’ll be for sale online and no doubt around the country - but the festival will be the best place to try them first and fresh.

Can I gift tickets?

You can buy as many tickets to gift away as you’d like, you absolute star.

What food is there?

There’s a bit more about it above, but Burger Bear, Fink and maybe more.

Will the food vendors have vegetarian and vegan options

What beers are there?

30+ Lines of Siren and guest breweries… and once a beer kicks it’ll be replaced with something new.

Can I pay with cash at the bar?

It’s all tokens, and you get £5 with your ticket, but you will be able to buy more with cash. We would appreciate you purchasing with card, however. There is a cash machine located next to Student Activities Centre, at the Students' Union building.

Can I buy a ticket on the door?

Theoretically, yes, but we’re expecting it to sell out so don’t delay - it’s only £12!

There is plenty of free car parking on site, and coffee for designated drivers, but we advise you get the bus or train!

We’ll have Anonymous coffee on site for designated drivers or mid session pick me ups, as well as soft drinks.

Can I bring my own food?

No outside food can be brought it, but honestly, look at the line up!

What if I have specific dietary requirements?

Let us know what they are and we’ll talk to the food vendors.

Will there be water available?

Yes there is, and blue badge parking.

There are four accessible toilets with one on the same level as the viewing area.

What about gender neutral toilets?

There are gender neutral toilets located in the upper 3Sixty area.

And how much is this?