Well, that was the start of our Nitro story. Introducing TWIN FLAMES. Until last year, we had a Red IPA sitting in our flagship range, Liquid Mistress. 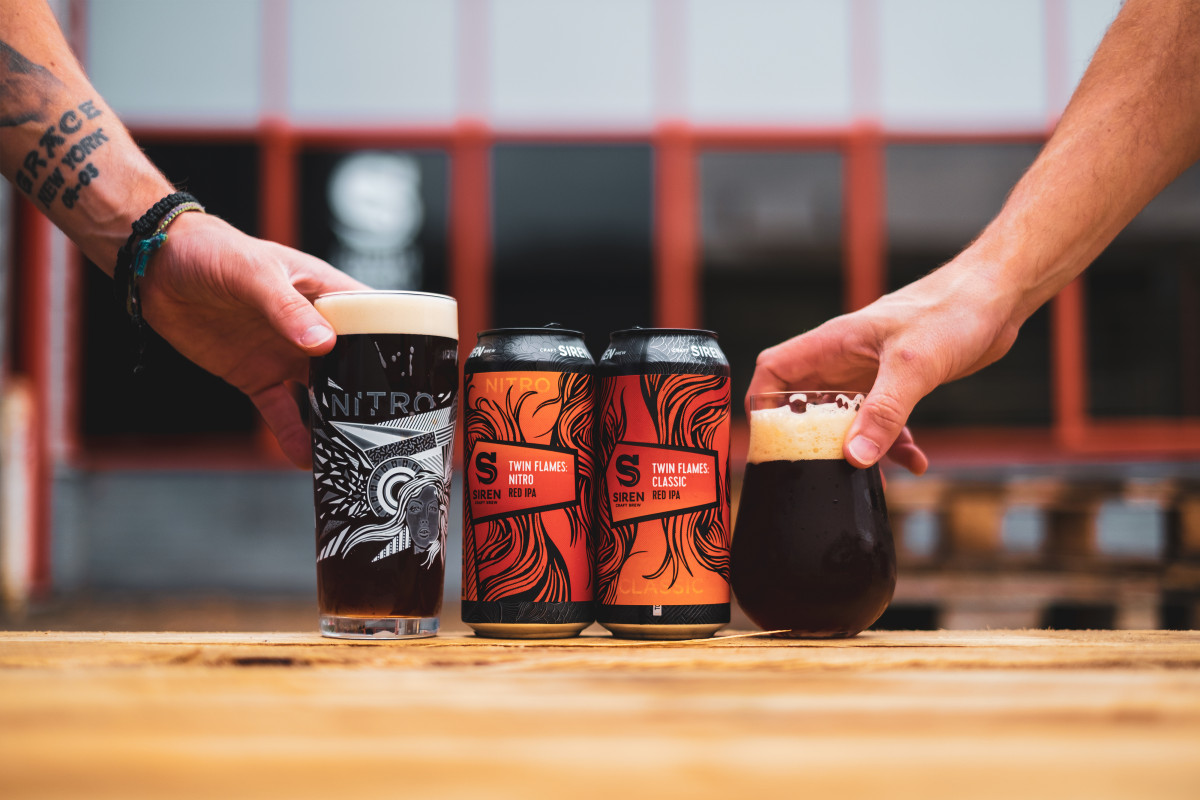 Which one will you be grabbing? We suggest both... ;)

With evolving styles and ever-changing industry trends the decision was made to retire the beer. However, Red IPAs have always remained a firm favourite here at Siren. In fact, it was a Red IPA that inspired our founder, Darron, to start a brewery - BrewDog’s 5AM Saint.

We’re very excited to have invested significantly in our canning line this year to allow us to package our beers with Nitrogen dosing. This means that the majority of the Carbon Dioxide usually bringing the beer to life is replaced by Nitrogen. Nitrogen is largely insoluble in liquids, so the beer takes on a really creamy character that’s very smooth to drink, with a full mouthfeel.

Here’s an excerpt from our Hard Pour Broken Dream Blog to give you a background on the process:

Normally, we force carbonate canned or kegged beers with CO2 (Carbon Dioxide) to give them the classic bubbly mouth feel we know and love. The ‘Nitro’ process replaces some of the CO2 with N2 (Nitrogen). Nitrogen is largely insoluble in liquids, so the beer takes on a really creamy character that’s very smooth to drink.

The nitro doser sits in between the filler and the sealer. Once a can is filled, we dose it with a small amount of liquid nitrogen. This is exactly as you’re imagining it, and needs to be dealt with careful consideration. When the tiny drop of liquid nitrogen hits the beer, it almost immediately boils, so we need to seal the can as soon as possible. This turns the liquid nitrogen into gas.

As Hard Pour Broken Dream was our first Nitro beer, it was always going to be something of a learning experience, allowing us to experiment and tweak as we go. For Twin Flames, we’ve been working hard on a few notable differences. 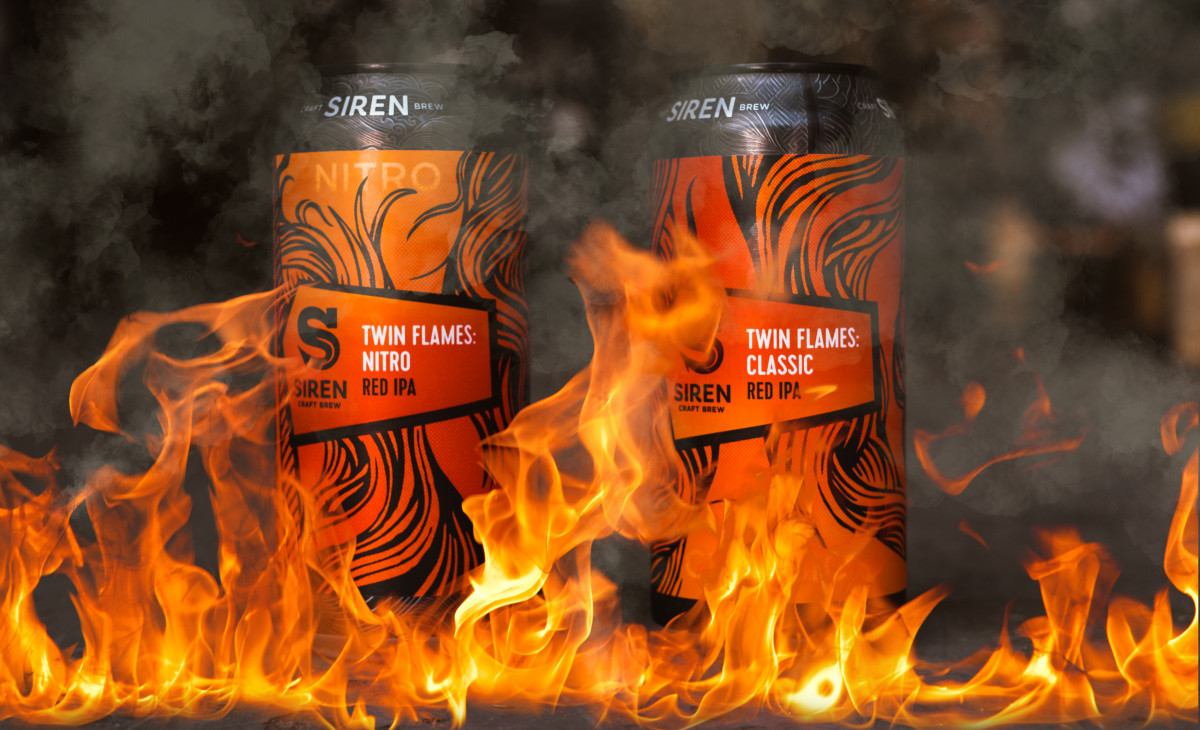 Along with a few key operational improvements made to the dosing equipment, the biggest process difference we have implemented was to lower the CO2 absorbed by the beer prior to nitrogenating. With our first run we found the CO2 dosage of 3g per litre was outcompeting the nitro and the bigger bubbles disrupting the smooth creamy head. This time around we’ve dropped that to 2g per litre, allowing the Nitro to have more of an effect.

Hard Pour Broken Dream was by no means a disappointment for us, but the Nitro Twin Flames should be even creamier. We’re determined to keep learning and keep improving on the beer we’re producing, always.

Traditionally, a perceived disadvantage of a Nitro beer theoretically is that big creamy head muffles the aroma (put simply, it traps it in as opposed to pushing it out). This is why you rarely see any hop forward beers being packaged in this way. However we felt that a correctly balanced Red IPA could live with a slightly subdued aroma, as the depth of fruit flavours carried over in the flavour would make up for it. Liquid Mistress on cask was our reference point for this theory - there was never CO2 there to push the aroma out of the glass, but there was enough hint of what was to come that it made you keen to dive in and try it.

Red IPA combines an intriguing and complex malt bill with fruit forward hops. The result is a beer ranging between deep maroon and bright red that offers the drinker a captivating malt base, often with notes of burnt raisins and biscuit, finished with the fruity tropical hops. It’s those vibrant flavour profiles that make it a perfect candidate for Nitrogenation.

Recently, we’ve been falling back in love with Red IPAs, with Here’s Johnny last year, Big Red Machine and an imperial version brewed with Vibrant Forest, Grand Designs. Each interaction has proved popular, with demand for more.

And so Twin Flames was born.

For Twin Flames we’re releasing two versions simultaneously. We’re canning two versions of the same beer - Classic, and Nitro. The classic version has the same treatment that any of our beers would - force carbonated and canned as normal. The Nitro version has the nitro treatment, and should be ‘hard poured’ - essentially, just turn it upside down and let the whole thing pour hard into the glass. It will settle with a beautiful creamy head.

Although they’re the same base beer, each version should bring its own characteristics to the table.

For the Nitro version, you should get a slightly longer cascade and a head that stays around a bit longer, a more rounded flavour profile and a fuller, creamier mouthfeel. The classic version should have more pop on the aroma, with plenty of hop forward berry notes. It may be noticeably less smooth in terms of mouthfeel, but more punchy and distinct in drinking.

But ultimately this is an experiment. We’re looking for as much of your feedback as possible on how you perceive the differences and how you like how each version presents. This is the early step in what we think will be an amazing addition to our brewing range going forward, so your input will be hugely appreciated. 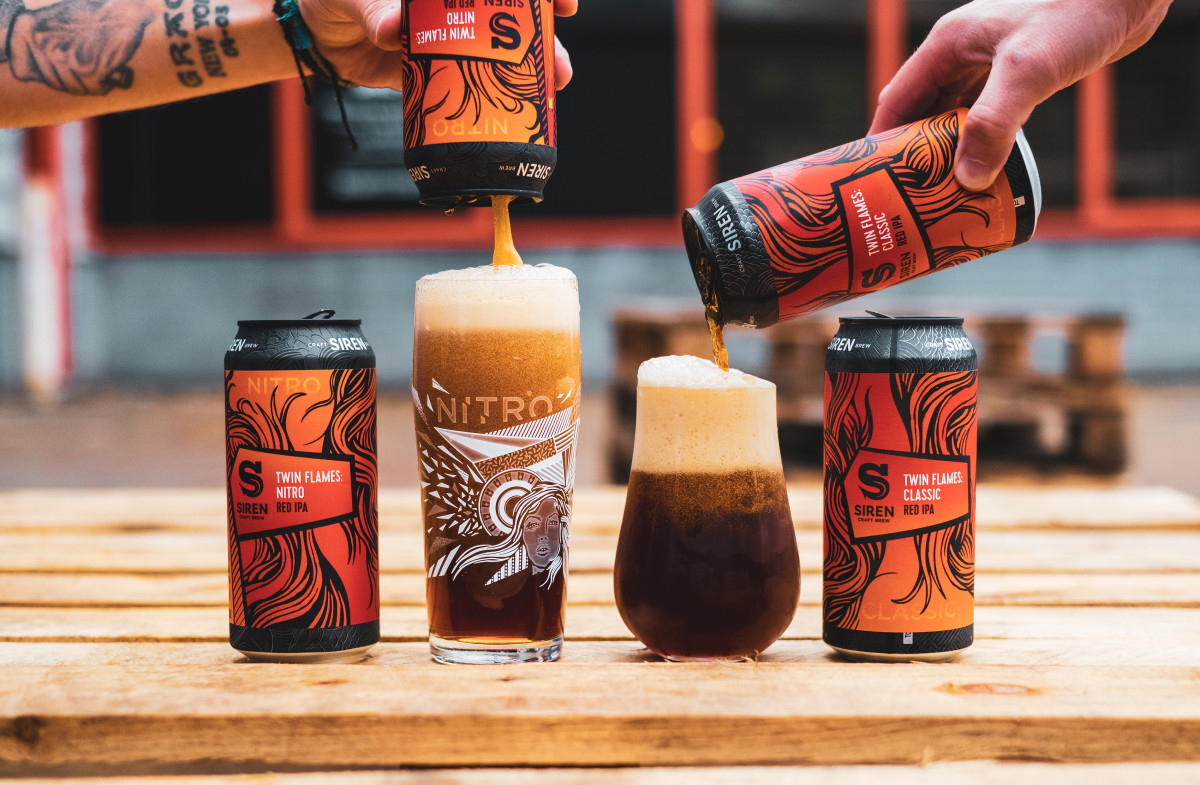 The name ‘Twin Flames’ might sound like a David Lynch masterpiece, but it comes from the idea of two parts of the same soul. Handily, it also comes with the imagery of the fiery red colour. Perfectly captured in almost retro comic book fashion by our designers, Studio Parr.

Both Twin Flames Nitro and Twin Flames Classic will be available on the Siren webshop and Tap Yard from Friday!

We’ll be selling the beers individually, but we heartily recommend that you grab a handy mixed case, which we’ll be selling with (or without if you already have one!) our purpose built Nitro glasses. The Nitro glass isn’t just a nice bit of glassware, it’s an important aspect. The style and shape we have debated, tested and landed on really allows the cascade to come to life, goblets and tulips are definitely not the way to go!

We can’t wait to see which people prefer and the notes and differences you all find! It’s a great opportunity to have some fun, enjoy and beer and get a bit nerdy all at once.