Our collaboration with Omnipollo in June last year was a rip roaring success.  Rik Lindqvist was the winner of the Swedish homebrew competition, and Nacken was the beer from that partnership. Well the gauntlet was thrown down to the UK homebrewing community to see what they could do, and the response was fantastic. A good range of styles were sent from pale ales to hoppy IPA's, Brett IPA's, Imperial Stouts and a few saisons. The judges at Siren went through the entries scored them and then sent the top 6 to Sweden for Henok & Karl to judge.

It was close : - is the suspense killing you? The winner was : Mike Bates from York with a well crafted Saison.  The judges felt that it had a great aroma and was a beautiful beer. Honourable mentions must go to Andy Parker & Moog Brew.  Andy Parker's Beetroot & lemongrass saison won quite a few fans and Moog Brews belgian porter was considered by both teams as a highly competent brew. So we are in the process of booking in a brewing schedule and will work with Mike & Omnipollo to put together the ideas of what we will brew, so keep your eyes out for updates. Thanks to everyone who entered, we were really pleased with the standards of entries and that there is a great homebrew community alive and kicking in the UK. 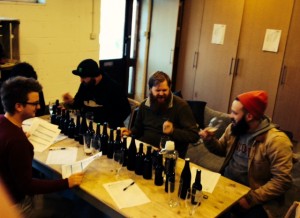