The Importance of Water

Water… the unsung hero of the brewing industry. When breweries tell you about all of our latest releases, we’ll always mention hops and adjuncts, sometimes malt bills… but rarely the water profile.

If you’ve been following our socials, and in particular the release of our Polly’s collab, Life Aquatic, you’ll have seen that we recently invested in some new water treatment technology. It’s an exciting development for us.

The water in Finchampstead is notoriously hard. This mineral rich water has been fantastic for our stouts and we owe a lot to it, with beers like Broken Dream winning Supreme Champion Beer of Britain and Caribbean Chocolate Cake becoming such an exciting date in our schedule each year. With this new equipment, we can strip our water back to a softer baseline and build from there. We wanted to go deep and take a dive into why water is so important for brewing, and how this will elevate our beers and improve our work as a brewery. 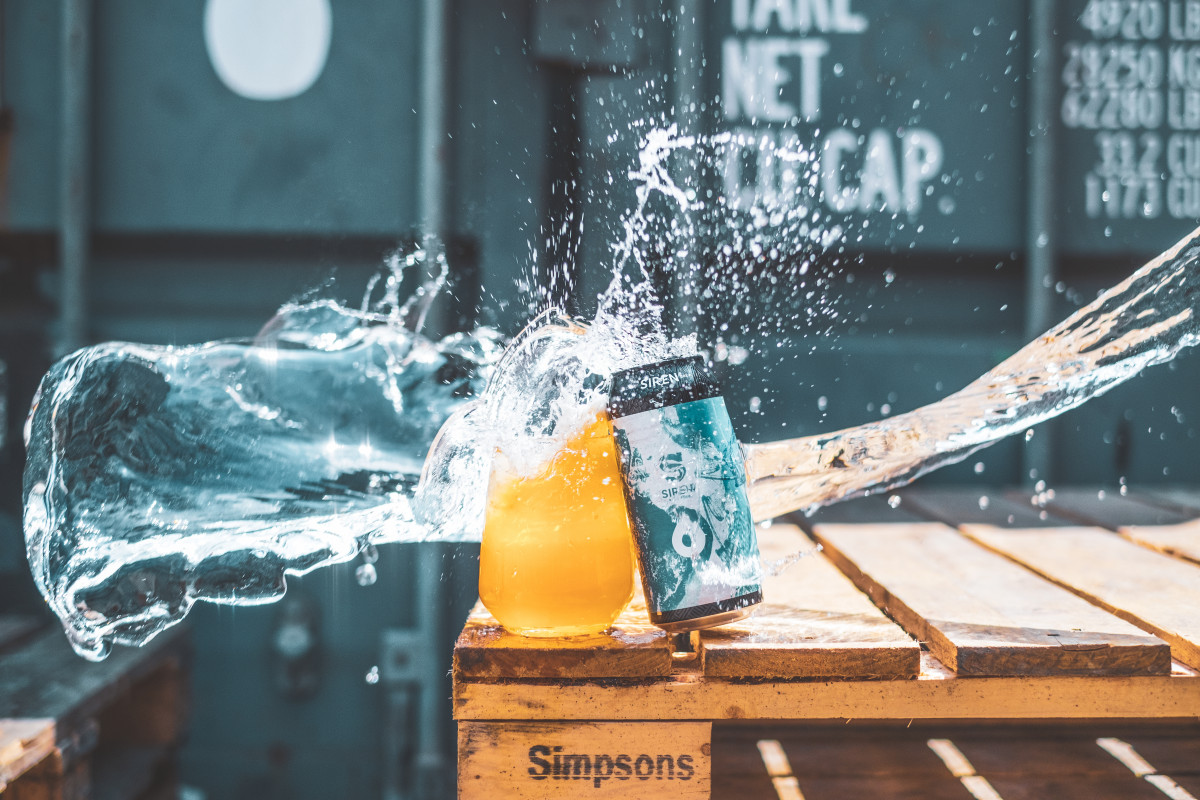 The benefits to starting from a soft water base are numerous and our entire brewery is now using the treated water.

Most brewers will tell you that brewing is 90% cleaning. For anyone who’s toured our brewery, you’ll have seen how the hard, chalky Finchampstead water leaves its mark on our brewhouse. If you live in a hard water area, you’ll know the frustration of water residue - particularly on appliances like kettles. If you can imagine that on an industrial scale, the toll on making sure our equipment is free of limescale and working efficiently over time can be a timely and costly task. 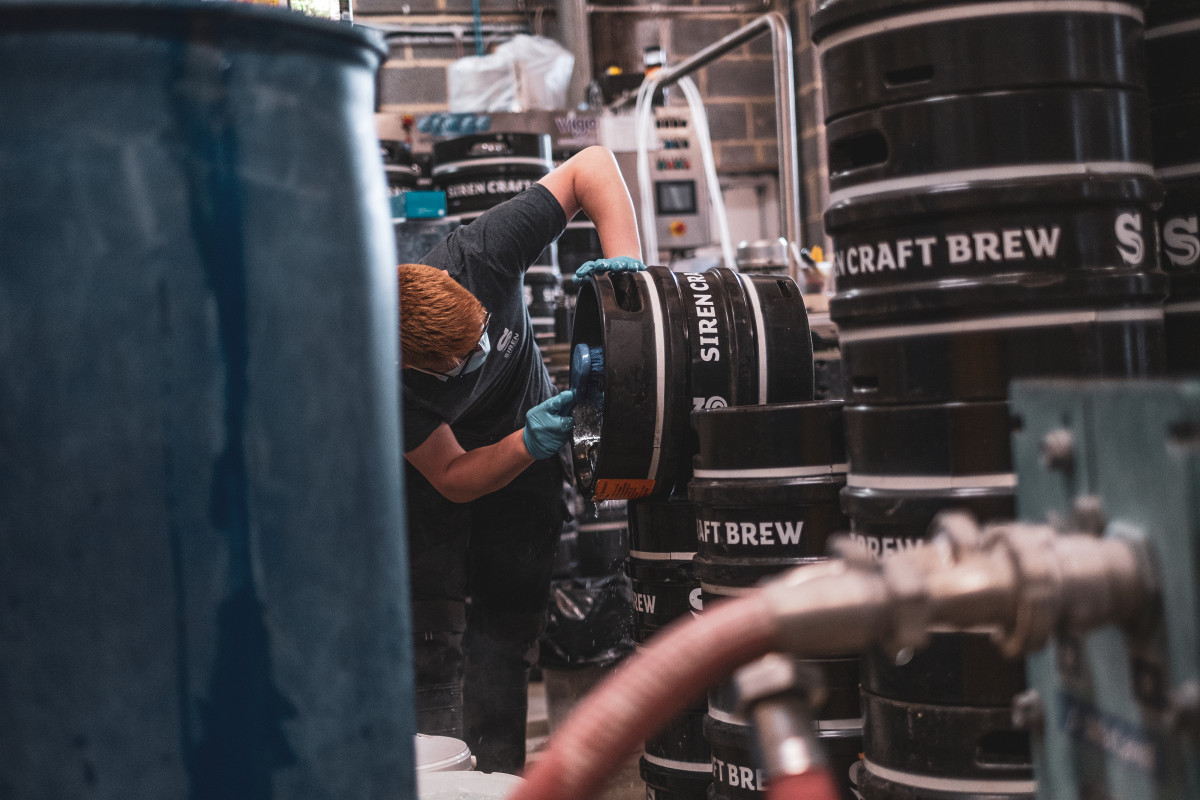 We have a lot of moving equipment in the brewery, like our canning line, which has a constant flow of water. Our hot liquor tank (HLT - used to heat water) would normally have around 4 or 5 buckets (50+ kgs) of solid calcium per month forming within it. Our brewers would have to climb in and dig this out, much like you would have to descale your kettle, but on a much larger scale.

Making cleaning easier for our team will improve their working days and allow us to focus on other areas that we’re keen to improve by freeing up time. At the same time we’ll be cleaning more effectively and protecting our equipment for the long term.

Okay, so maybe cleaning is a bit of a boring place to start, but wait until you hear how this will allow us to make an even more diverse range of beers that taste better than ever!

Head Brewer, Sean, started thinking more intensely about the local water profile when we brewed Every Minute Matters, with Green Cheek Beer Co. Evan (From Green Cheek) and Sean wanted to aim for a beer with a very high IBU, but delivered in a clean, crisp way due to the Sulphate content in the water (as opposed to a harsh or astringent sensation). We were able to deliver on this, and we loved the results. But it didn’t quite scratch the itch - in fact it just got us wondering about the potential. We now have the capacity to keep dialling in the precise bitterness that has become synonymous with the California IPA style - check out this blog for more on that. 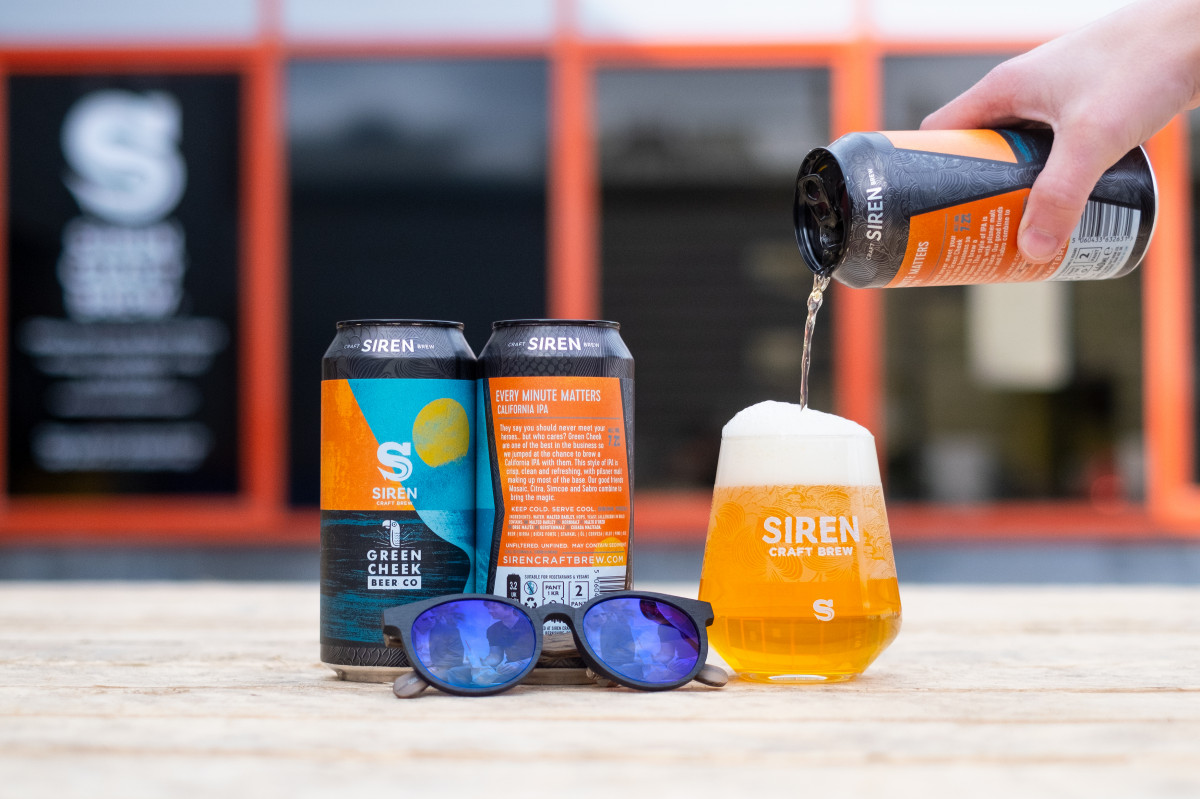 Water profiles can have a huge impact on the overall outcome of a beer. For example, a sulphate heavy water will help to pronounce bitterness, whilst a chloride heavy water will produce a softer mouthfeel. If brewing something like a West Coast IPA, for example, you’d want a water that’s 3 to 1 in favour of sulphates to chlorides, whereas it may be the opposite for a New England style beer.

Previously whilst our water profile was perfect for stouts, sometimes there would be a detectable ‘chalkiness’ in some IPA or pale ale.. Our centrifuge would help to remove some of the unwanted elements, however this also ran the risk of removing some elements of flavour that we’d rather keep in, primarily hop character.

“We can now manipulate the water by adding things back, to the right amount that we wanted. Previously, we could only add, not take away.“

With a neutral, softer, water profile, we have far more control earlier in the process. With the softer base, we can add the required salts and minerals as required, for example returning the water to its previous base for stouts.

This work has already started. The recent lagers we’re brewing tend to use the new profile with nothing added, allowing for a far cleaner, softer finish with crisp hoppiness. Pastel Pils is a great example. In Life Aquatic, our collaboration with Polly’s, we added a huge amount of chlorides, making the beer feel a lot fuller and rounder. 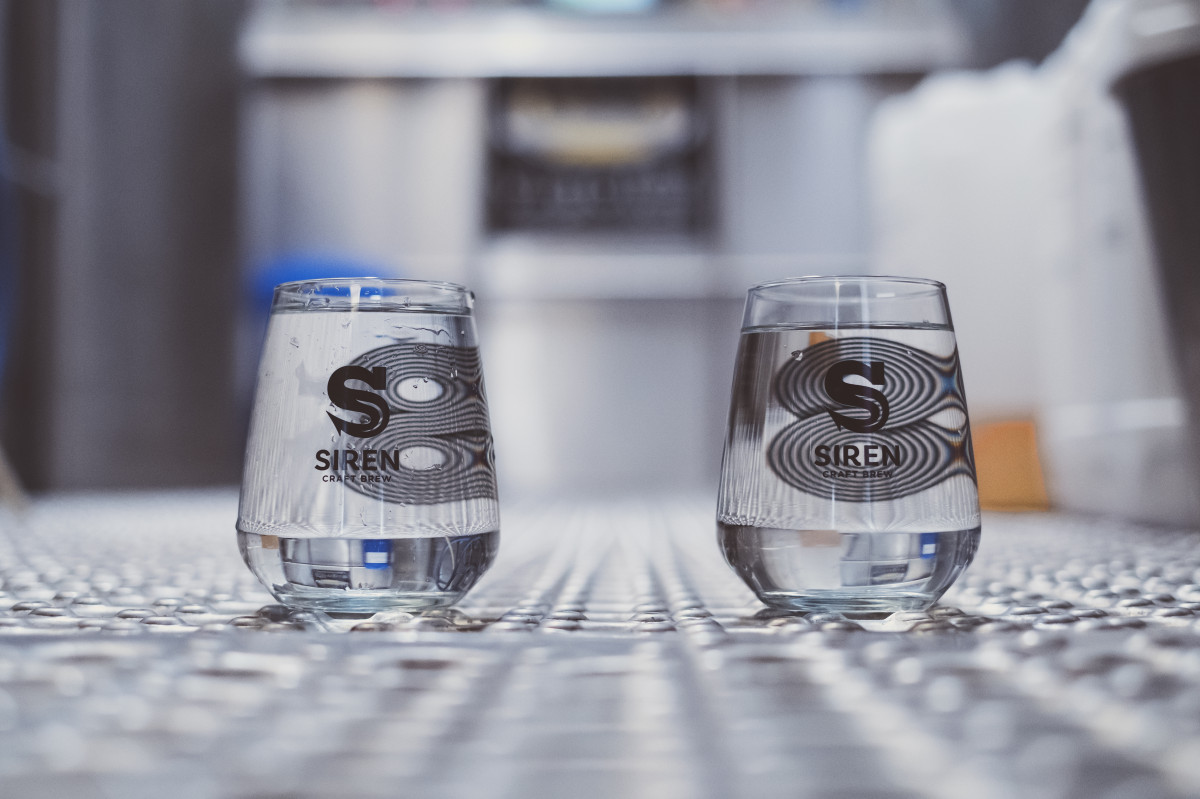 Two identical glasses, both water, but big differences - one is tap water and one is treated water. There's a noticeable difference both in aroma and taste.

We’ve even managed to utilise the new water profile in an ‘away’ collaboration with Elusive! “Finchampstead water is pretty hard, as I found out about five brews in when I noticed the limescale building up in our HLT. We've been battling with it since our very first brews, trying to figure out the best treatment to achieve the desired profile,” says Andy Parker, founder.

“Brewing Pale beers is more of a challenge. We acidify the liquor and do our best to soften the water with a combination of salts and filtration but achieving that pillowy soft mouthfeel we desire in some of our hazy juicy beers is still pretty tricky. When we started to discuss the recipe for our collaboration, Sean suggested we take some water from Siren's new filtration system.”

We sent over the analysis and delivered 1000L in an IBC, as recorded here!

Our wonderful neighbours @SirenCraftBrew have had our backs from day one & we couldn't imagine our 5th birthday series without them. We've borrowed a lot from them over the years but this is a first - their super soft filtered water will bring Friday's collaboration brew to life! pic.twitter.com/iHam8ndIcO

Too Many Waters, celebrating Elusive’s 5th birthday, launches in cask, keg and can next week. 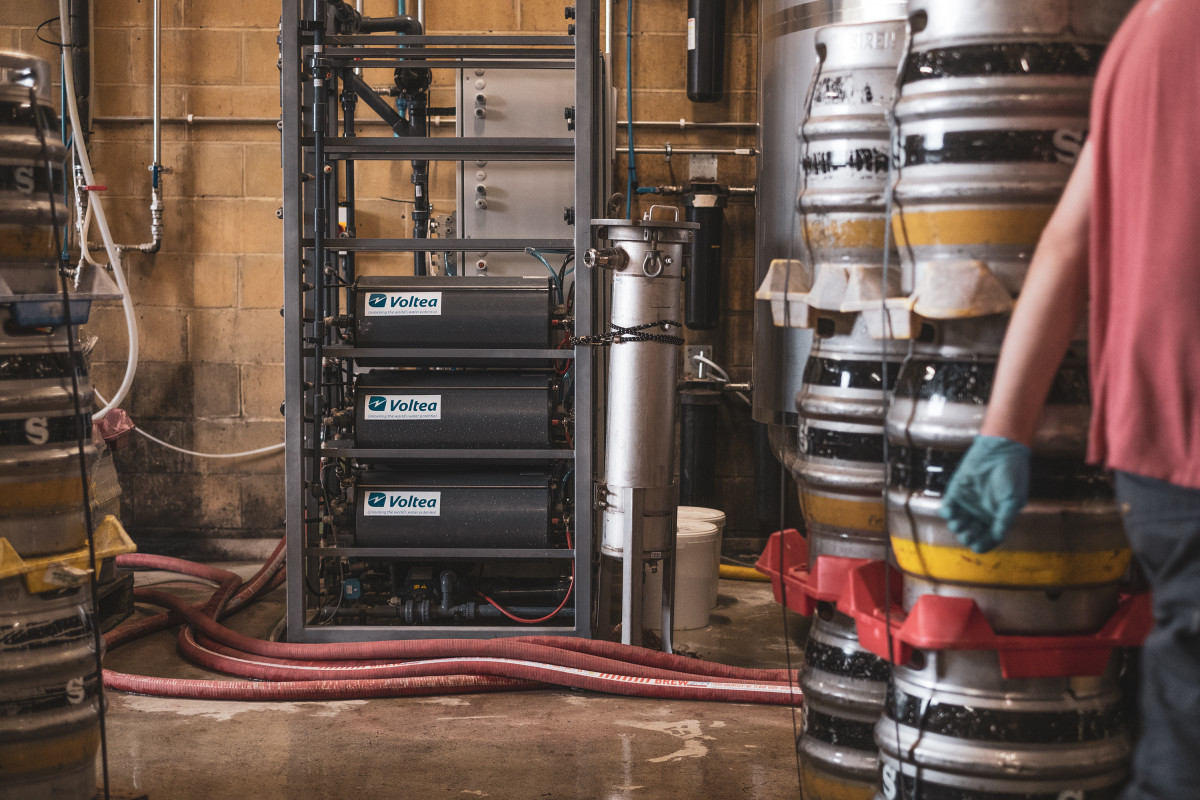 The beer, and the quality of the final product is first and foremost here at Siren, so it’s been great to move forward with installing the water treatment plant, the latest in continuous investments we’re making. Sean and the brew team are not only excited to experiment with the new equipment, it’s now much nicer drinking water too - something I can personally attest to! 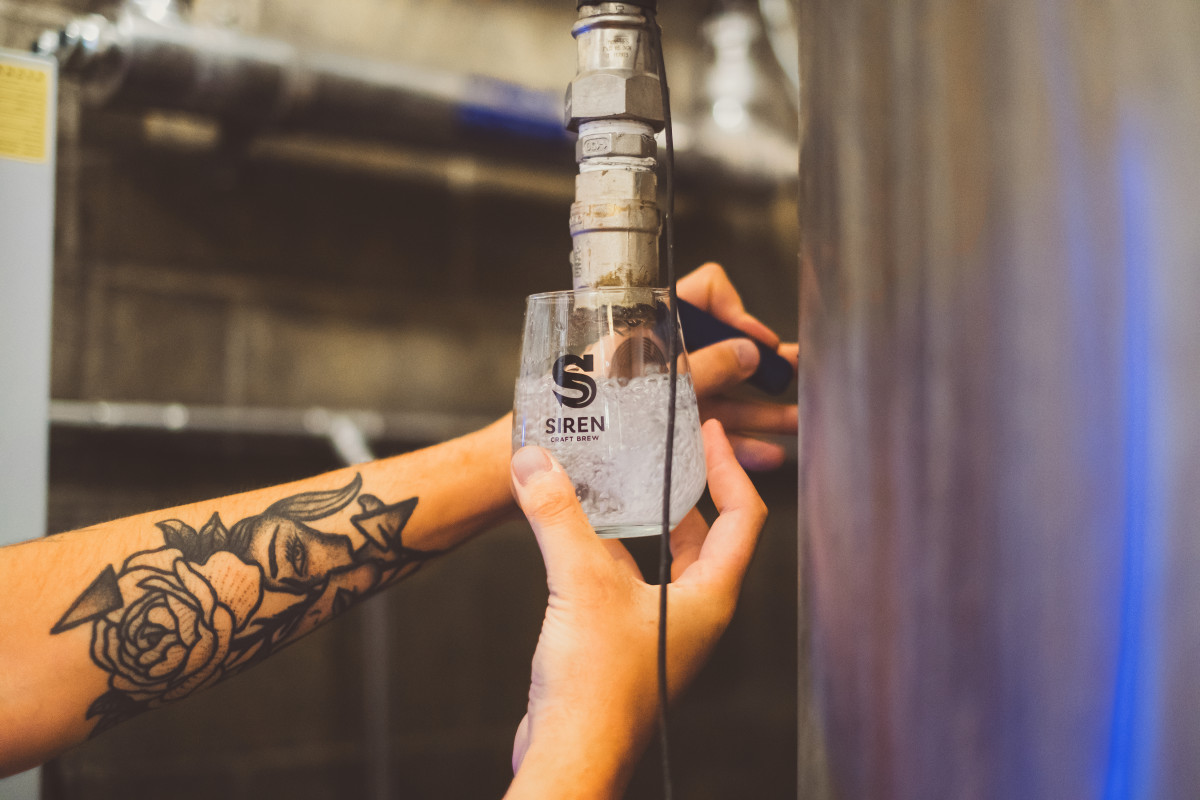