Charles de Gaulle once said, “How can you govern a country which has 246 varieties of cheese?” That got us thinking - why is wine generally considered the best pairing for cheese, and all its varieties, when with beer you have 246,000,000* different varieties?

Firstly, it’s really important to remember that we all taste things differently… and that’s fine. It’s a good thing. If it wasn’t we’d only have one type of cheese and one beer.

So why can we make a case for beer being better than wine for cheese pairing? Quite simply, the vast spread of flavour profiles. From sharp lemon sours, through to rich, thick and decadent chocolate stouts. There’s beer with spice, there’s dry beer and everything in between. Most importantly, there’s bitterness, and carbonation. 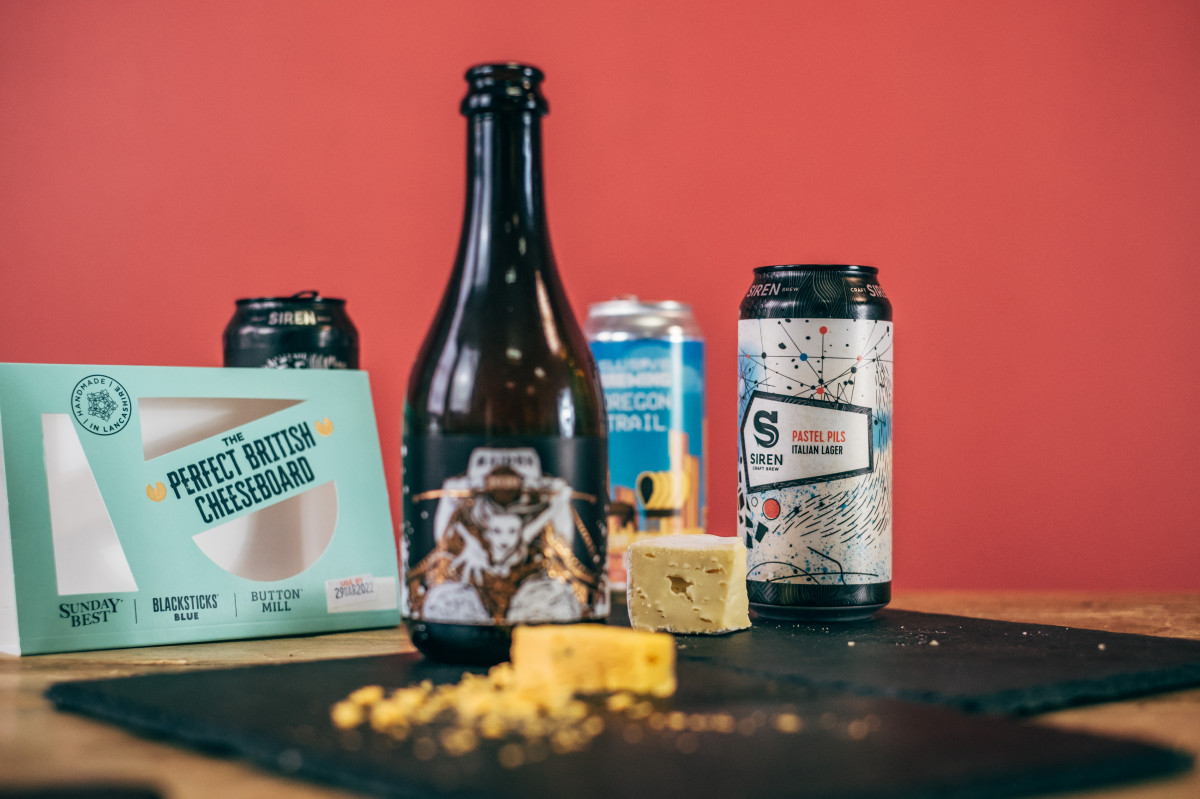 How do you pair beer with food?

There are 5 main food tastes - Salty, sweet, sour, bitter and umami. When it comes to pairing, ideally we want our foods and drinks to do one of three things - cut, complement or contrast.

Complement - Desirable flavours are highlighted in both beer and cheese. Or... common ground, like a nutty cheese with a brown ale.

Cut - The taste cuts through, like a sharp acidic flavour. This can work as a cleansing aspect.

Contrast - An example is peanut butter and jam - the salty, nuttiness works with the sweet fruity acidic. Sweetness should counter acidity / spiciness or bitterness.

And so we go back to our opening paragraph - beer is rich in variety. Beers cover all of those main taste groups, and come with a wide range of flavour profiles. As mentioned, there’s big, sweet stouts to sharp, acidic sours and myriad between; not to mention the bitterness and carbonation (although we’ll concede that of course, some wine is carbonated.)

Bitterness is an incredible element for food pairing and allows us to balance with the other elements of taste. The carbonation aspect washes the mouth, which is a brilliant tool for pairing with cheese, which often has a creaminess that coats the mouth.

How to taste beer.

It seems pretty obvious, right? Take a swig and you’ll taste it. Day in, day out, absolutely, there’s no need to over think the action of tasting beer. But for food pairing it’s worth taking it to an extra step.

Firstly, we need to understand how important aroma is when tasting. Aroma, combined with taste, creates flavour. Before tasting a beer, make sure to appreciate the aroma. This often starts with appropriate glassware. Don’t fill the glass, allow plenty of space for the gas to fill the glass above the beer. You can waft the glass from left to right under your nose, but don’t be afraid to get your nose in for a good sniff! 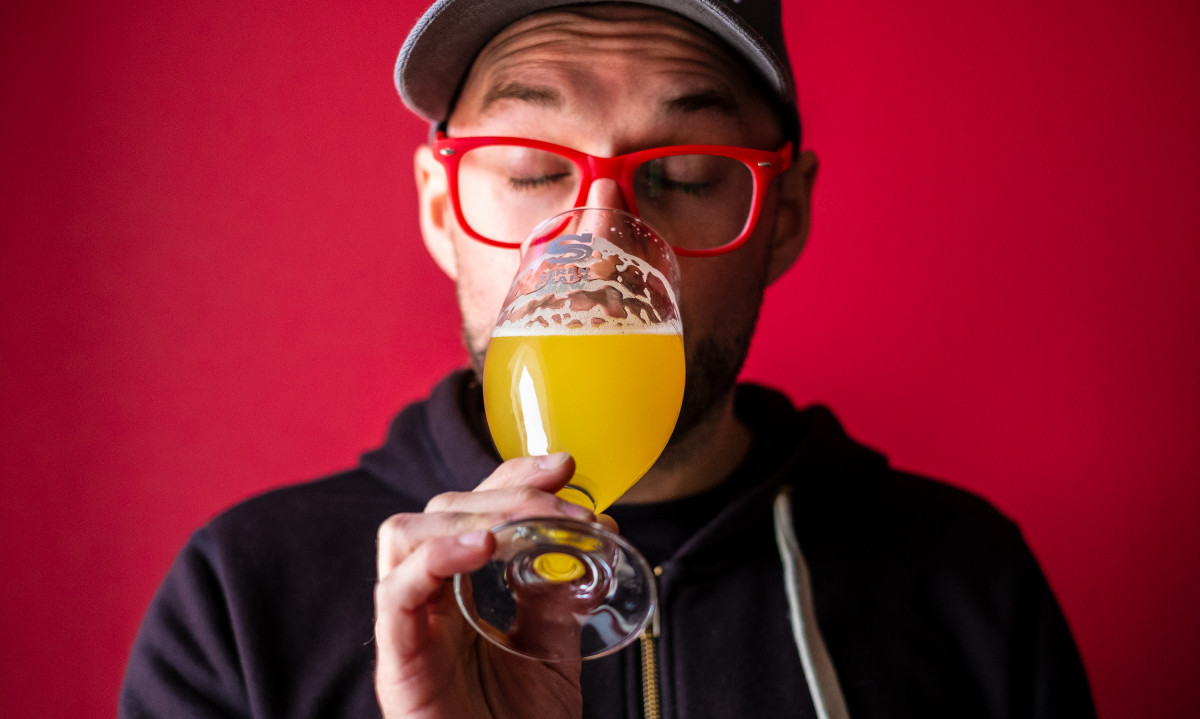 Once you take a sip, allow the beer to sit in your mouth for a moment before swallowing. You might also like to try breathing out through your nose as you swallow. You’ll often find some slightly different aromas at that moment. This is because the beer has warmed slightly and the enzymes in your saliva have combined to release more aromatics.

As for whether you eat your cheese first, or drink your beer first, it’s a bit of both. We like to have a swig of beer, try some cheese, and then have another swig to wash the mouth and combine with any residue cheese. If you’ve got your pairings right, this is pure heaven.

What beer goes well with cheese?

Alright, let’s get onto the fun bit! When looking to pair food and beer, you’re looking to match up intensities. Look at the strength of flavours and consider a good partner. You wouldn’t want to pair a big imperial stout with a delicate sea bass as the fish would be completely overwhelmed. Equally, a big, rich and hearty beef stew may completely obliterate the mellow notes of a pale ale. However, that’s not to say that you wouldn’t enjoy a pale ale alongside your stew - as it may just be of a refreshing nature - but it’s not necessarily the best pairing. 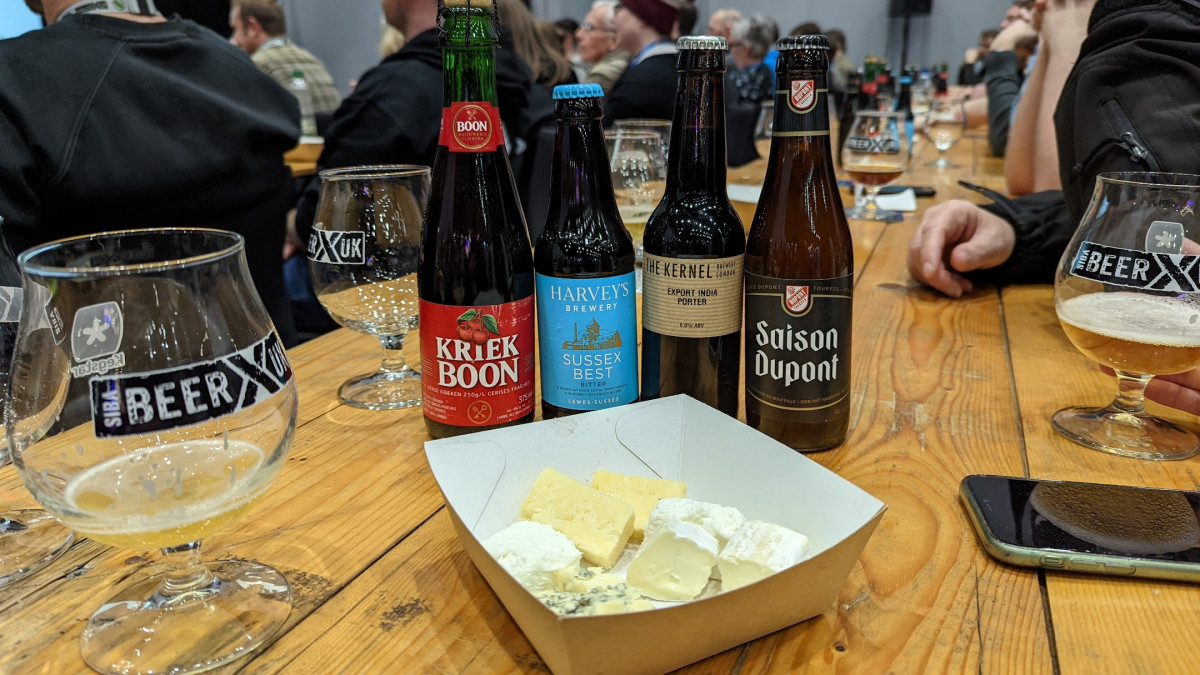 Around the time of our 9th Anniversary, we held two live cheese pairings - one in person at the Tap Yard, and one online. We’ll include a few of the pairings from those events, and include a new one. We’d also really like to hear your pairings, so make sure you get in touch if you have a good one.

If you’re looking for a cheese that goes well with IPA, Cornish Yarg is an absolute beauty of a cheese and you won’t be surprised to hear that it hails from Cornwall. It’s classed as a semi-hard cow’s milk cheese, and is wrapped in nettle leaves before being left to mature. It’s typically fairly soft at the edges, with a slightly more crumbly texture towards the middle. 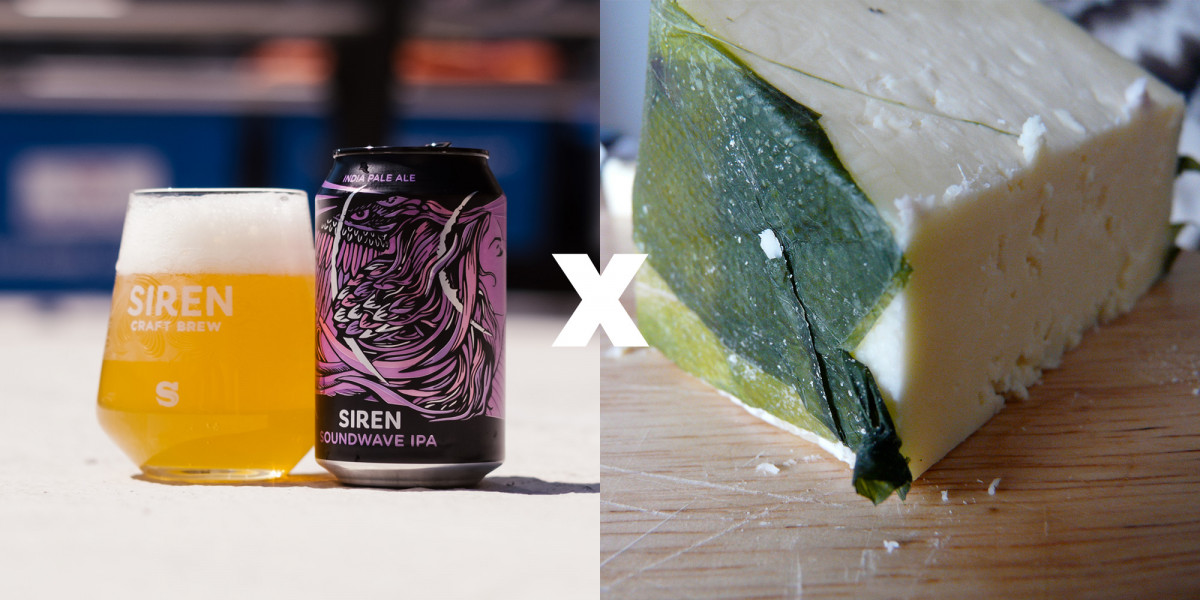 The nettle leaves form an edible rind with naturally occurring mould. This brings a mushroomy taste, which combines with a fresh, lemony and creamy cheese.

Paired with Soundwave, it’s a complement situation. The lemon nature of the cheese accentuates the citrus hops, and rounds out some of the beer’s bitterness, whilst the slight mushroom notes pushes the malt backbone. Overall, a really nice, smooth pairing that brings both beer and cheese to life.

Maida Vale is a semi-soft cheese made from unpasteurised Guernsey cow’s milk and a vegetarian rennet. What makes it truly special, is that it’s washed in our very own Soundwave. The result is rich in tangy and malty notes with a buttery soft texture and an earthy, yet hoppy character. It’s fruity and punchy, with a delightful salty edge. 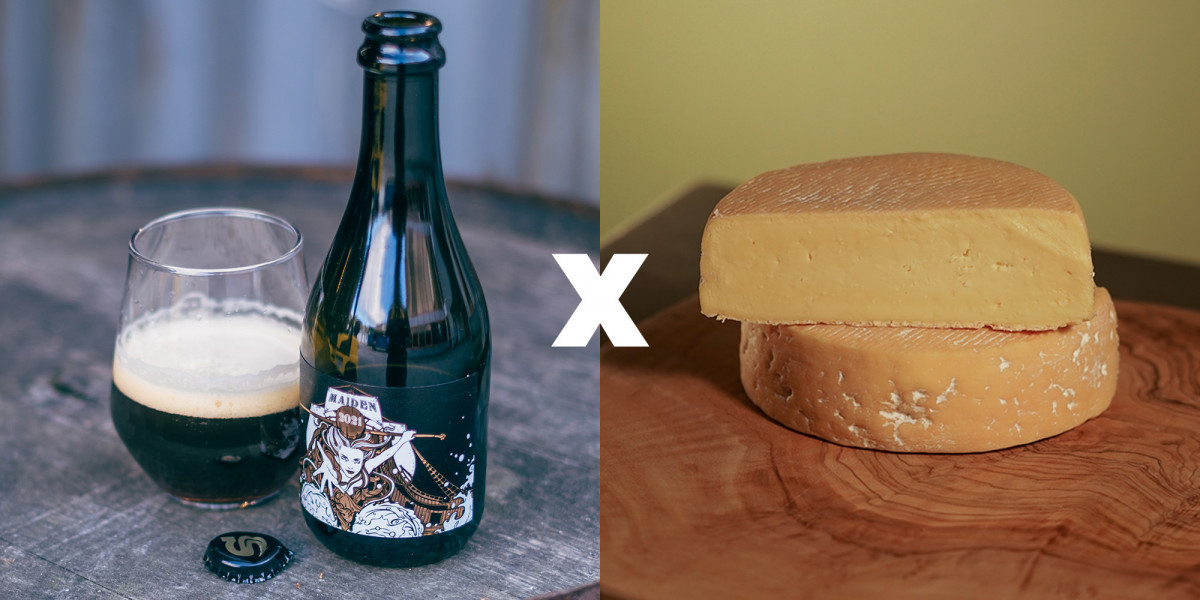 We’ve paired this with Maiden. We can recommend no better use of your time than find cheese to pair with Maiden. Barrel aged barley wine and cheese is pretty much always an absolute delight.

Together, these two complement each other wonderfully. As this year’s Maiden finishes a little dryer with a hint of minerality, it cleans the palette from this nice gooey cheese.

Beacon Blue is a blue Goat’s Cheese from Butler’s Farmhouse Cheeses. For some, like yours truly writing this, the very mention of Goat’s Cheese might make you a bit wary - but as someone who personally doesn’t particularly like Goat’s Cheese - trust me.

Butler’s describe this cheese as silvery like the moon, silky smooth, creamy and fresh on the tongue, with a good helping of peppery tang that quickly develops, leaving you craving more and more. And we agree. 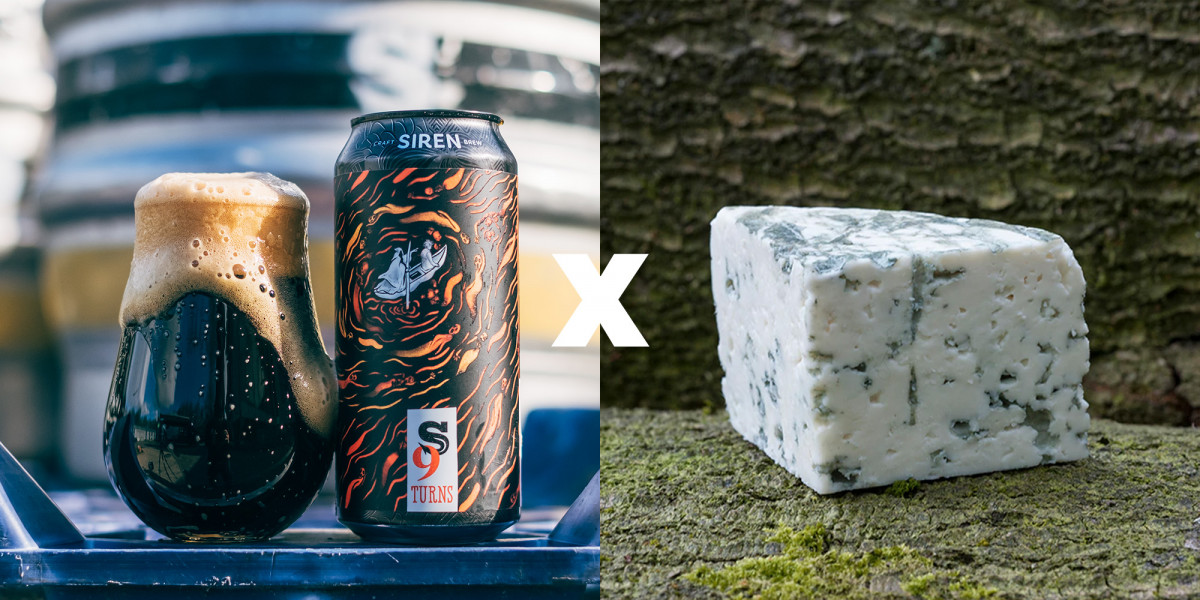 As for Turns, our 9th Anniversary 11% Imperial Stout, brewed with tonka beans and amburana wood. The combo of these two, with a backbone of speciality malts and a healthy dose of muscovado sugar create a beer with sweet high notes and layers of spice.

As a pairing, they are completely contrasting - one sweet and rich, the other creamy and earthy with funky ‘blue’ flavour. But together, they complement each other fantastically.

The cheese is accentuated by the malt backbone of the beer, and the cheese helps to balance the beer’s sweetness.

We knew this combo would work, as blue cheese and stout is an absolute match made in heaven. We heartily recommend Broken Dream with Blacksticks Blue as well.

At the time of writing, 8% DIPA New Favourite Day has just finished packaging off the canning line. Naturally, we haven’t had time to work on a pairing yet. So based on what we’ve said above there’s a couple of things we’d like to suggest. But ultimately, we want to hear your suggestions! 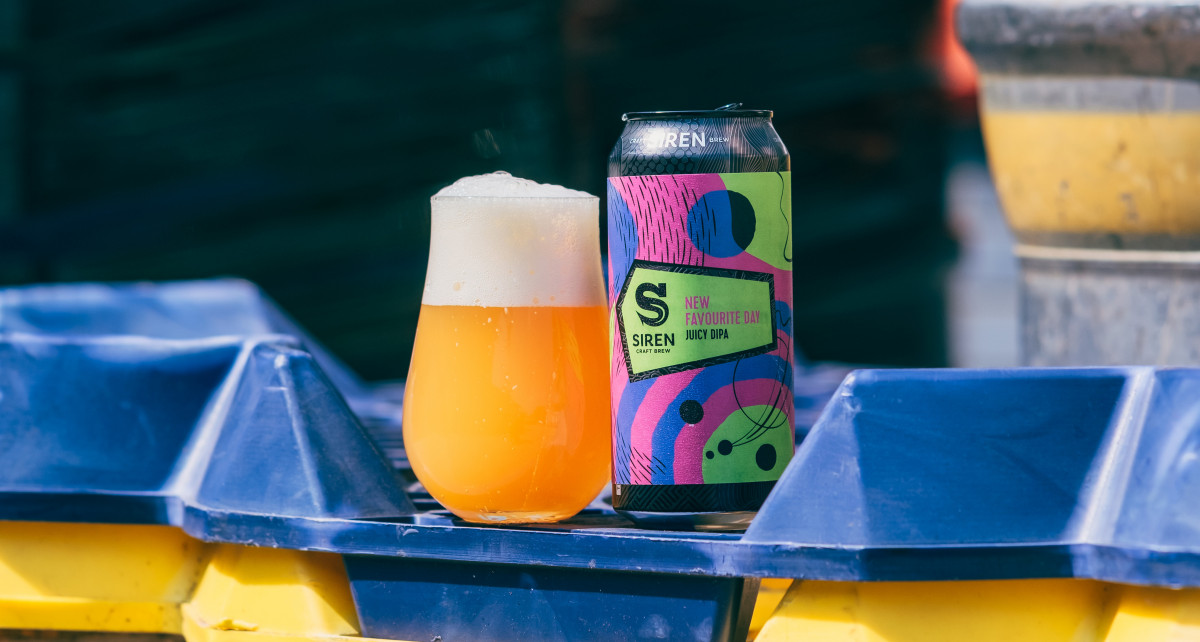 Some people say that big, juicy New England style IPA is a notoriously difficult beer to pair with cheese. But we always like a challenge, and with the big stone fruit flavours and delicious boozy punch we think we’ve got a good idea.

The first suggestion is a Roquefort. This is a big beer with a big flavour, and so we need a big cheese. With Roquefort’s distinct bouquet and pungent earthy flavours, sweet burnt-caramel taste of sheep's milk and sharp, metallic tang it’s a good candidate to stand alongside the beer. 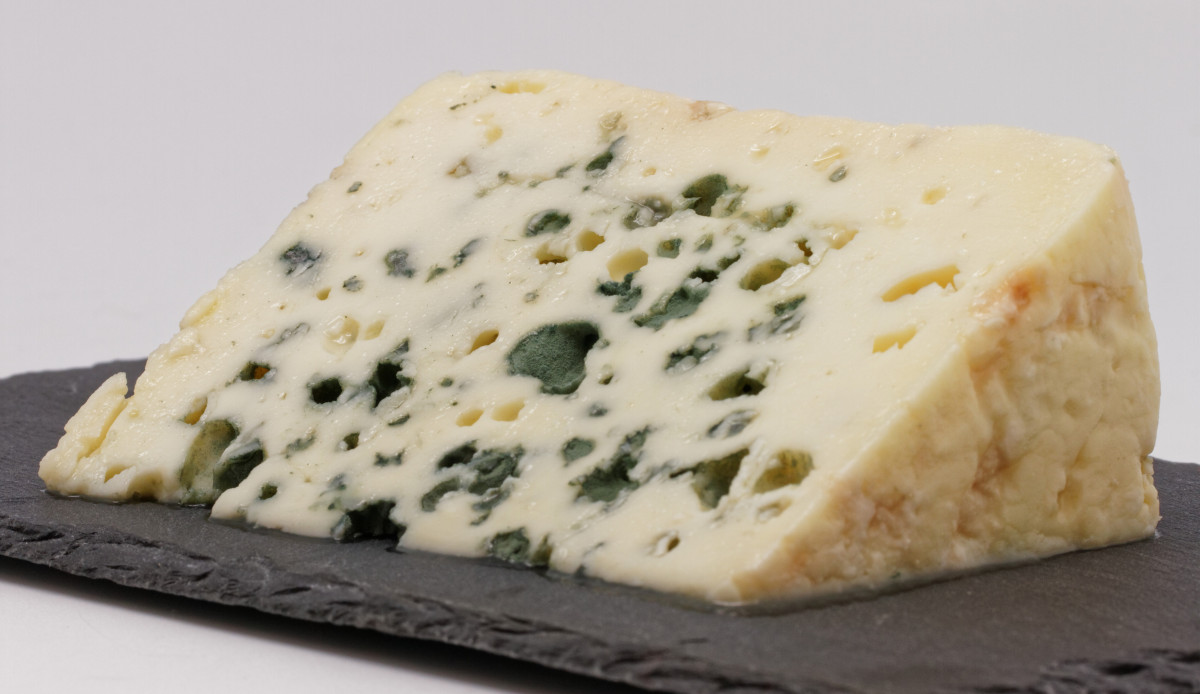 We’d also suggest a manchego. Manchego is the head of the Spanish tapas table. It’s nowhere near as punchy as Roquefort, but it does have some big nutty flavours that we think would bring out some of the malt character in the beer. 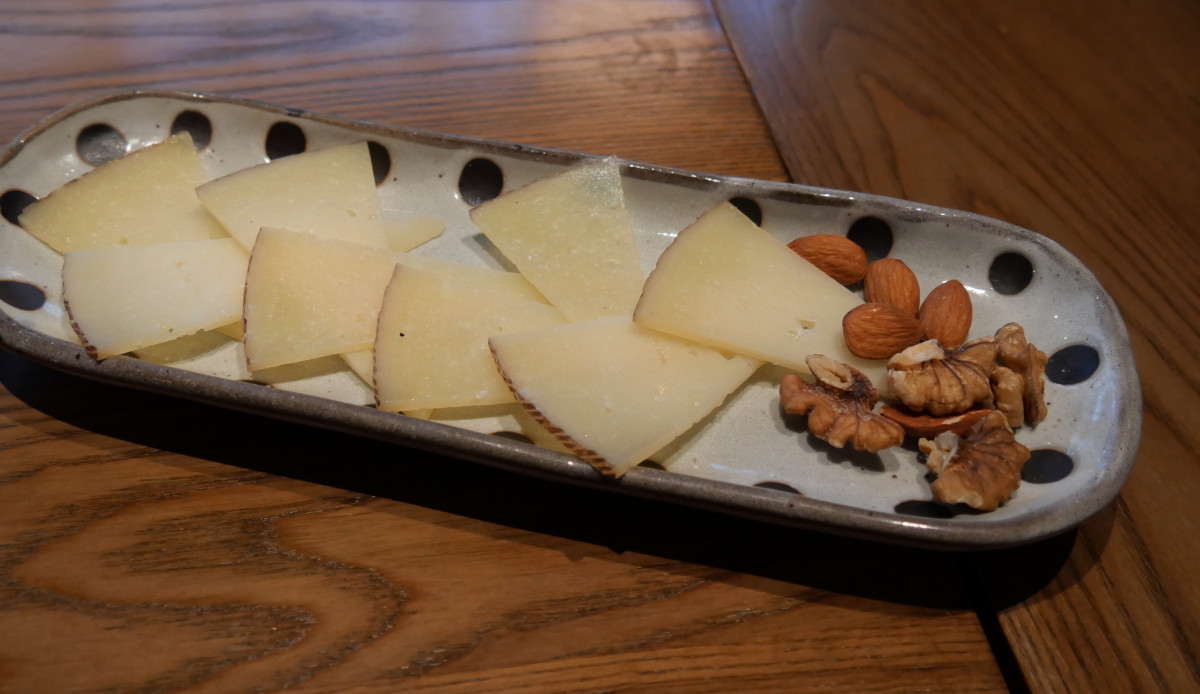 Give pairing a go, and let us know how you get on!

But remember, we all sense differently, so we may not all find the same things. Enjoyment can also depend on what you’ve previously drunk or eaten, as there may be some residual flavours that impact the pairing.

Emotion, memory and your surroundings can also play a big part. Ultimately, there are no wrong answers, only the chance to spend some time enjoying both beer and cheese, and you can never go wrong with that.

New Favourite Day is available now from the Siren webshop and Tap Yard.

It's Double IPA time! This moreish beer has big, ripe tropical fruit aromas to draw you in, before drinking with a creamy body and deliciously soft mouthfeel. There's a nice sweetness, offset with punchy mango, pineapple and citrus notes from a flavour-packed hop selection. Today is definitely our new favourite day.